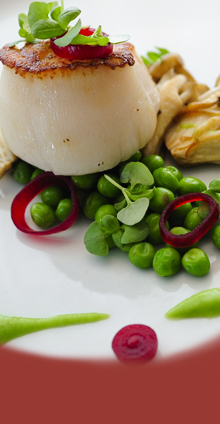 (Boston) – Boston is celebrating St. Patrick’s Day with a tasteful display of contemporary and traditional cuisine from Ireland as the 5th annual Gaelic Gourmet celebration takes place the week of March 11-18, 2009 in hotels, restaurants and pubs throughout the city.

The annual program, presented by Tourism Ireland and the Boston Irish Tourism Association, is designed to showcase new cuisine from Ireland alongside the distinct culinary traditions of Massachusetts.

“Ireland is enjoying a culinary renaissance, and March is the perfect month to convey this exciting trend to the American public,” said Joe Byrne, Executive VP, United States and Canada, Tourism Ireland.  “We want Americans who are thinking about an Irish vacation this year to know they can expect excellent cuisine.”

“Once known only for its clam chowder and baked scrod, Boston and Cambridge are today part of a culinary circuit and destination," said Patrick Moscaritolo, president of Greater Boston Convention & Visitors Bureau. "When we started Restaurant Week nine years ago, 35 restaurants signed on.  This year's Restaurant Week in March features 219 restaurants, an indicator of our vibrant culinary scene."

“For people seeking a tasteful way to experience and enjoy Irish heritage in March, Boston is the place to be,” said Colette Quinlin of Boston Irish Tourism Association.

The Tamo Lounge at Seaport Hotel Boston is hosting the Seamus Connolly Trio on March 13, 14, 16 & 17, featuring top flight Irish traditional music by one of Ireland’s master fiddlers as well as exquisite lunch and dinner menus by executive chef Rachel Klein and her staff.

The evening of March 17, Chef Cleary from the Westbury Hotel in Dublin joins Chef James Tierney, executive chef at the Stanhope Grille at Jurys Boston Hotel, at a private event hosted by General Manager Stephen Johnston.  The Westbury hotel and Jurys Boston Hotel, soon to be renamed The Back Bay Hotel are both members of the Doyle Collection.

On Wednesday, March 18, Chefs Reidy and Cleary appear at the Massachusetts State House for “A Day of Irish Culture,” which runs from Noon to 5:00 p.m.

The culinary week in Boston was developed in 2005 as a way to celebrate St. Patrick’s Day in a more stylish, sophisticated way, said Quinlin, whose association promotes travel between Massachusetts and Ireland throughout the year.  Since then, over 20 chefs from Ireland, Northern Ireland and Canada have participated, along with dozens of Boston chefs.

Organizers say the culinary collaboration during Gaelic Gourmet week will extend into the spring, when the Volvo Ocean Race comes to Boston and then to Galway.   One of the world’s premier global sailing events, the Volvo Ocean Race is stopping at Boston’s Fan Pier from April 27 through May 15, and then onto Galway, where the race docks from May 22 through June 5.

The Volvo Ocean Race carnival in Boston this May will be a tremendous showcase for all that Ireland has to offer, said Ruth Moran of Tourism Ireland, which is one of the sponsors of the Fan Pier event. And weve invited Chef Lynch to return to Ireland to participate in the Galway festivities.

In addition to culinary events, the web site features a variety of Irish and Celtic concerts, dance performances, theater, literary readings, parades and cultural gatherings taking place throughout the Commonwealth of Massachusetts.  According to the US Census, Massachusetts is the most Irish state in the USA, with 24% of all residents claiming Irish ancestry.

About the Boston Irish Tourism Association

BITA Contact: Michael P. Quinlin / 617 696-9880 or IrishMassachusetts@comcast.net
Founded in 2000, the Boston Irish Tourism Association promotes cultural tourism in Massachusetts year round to the convention and visitors industry.  It combines grass roots Irish-American groups and small businesses with mainstream cultural venues and with the state’s vibrant hospitality industry.  BITA has developed an Irish Heritage Trail that features over 70 Irish landmarks throughout the state, and a resource guide, Finding Your Irish Roots in Massachusetts.  In addition, BITA promotes stronger ties between tourism agencies in Massachusetts, Ireland and Canada and encourages travel between these great destinations.

Tourism Ireland Contact: Ruth Moran / 212 418-0832 or RMoran@tourismireland.com
Tourism Ireland was established under the framework of the Belfast agreement of Good Friday 1998 to promote increased tourism to the island of Ireland. Tourism Ireland is jointly funded by the two governments with the marketing based on a 2:1 ratio South/North. The company has been fully operational since January 2002 employing over 140 staff in offices located in Dublin, Coleraine and in overseas markets. The role of Tourism Ireland in New York is to carry out strategic all-Ireland destination marketing in the US market.