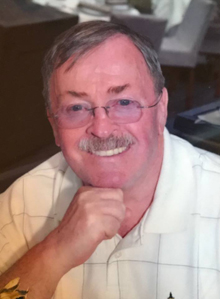 In Memoriam:
BILL McGOWAN - HELPING OTHERS A WAY OF LIFE

When he wasn't visiting family and friends in Ireland, Bill McGowan could usually be found in the trenches of Dorchester and Quincy, working with regular Irish folks who toiled each day earning a living and raising their families. As an accountant, his busy business in West Quincy, aptly named McTaxes, helped scores of carpenters, nurses, electricians, waitresses and laborers file their taxes, get sound financial advice, apply for small business loans, and find opportunities for work.

Bill was also a community leader, a mentor and an advisor, a fixer who could look at problems and figure out the solutions. He held fundraisers at Florian Hall for many an Irish immigrant down on his or her luck, whether from injury, illness or a death in the family. He also helped raise nearly $900,000 for Sister Josephine Goretti, his cherished sister, who ran a Catholic School in the slums of Lagos, Nigeria.

Bill devoted his life to others, not expecting anything in return. His good friend Reverend Dan Finn, Executive Director/Chaplain of the Irish Pastoral Centre – Boston, recalled a motto by which Bill lived:

“These words were Bill’s goal and mission in life, which he achieved in large measure, and is an ongoing example and source of inspiration for all of us,” said Fr. Finn.

Born and raised in Cloona, County Sligo, Bill was the seventh of eleven children. In the 1960s, he entered the seminary and spent a few years with the Missionary Society of St. James the Apostle, which sends priests to missionary service in the poorest countries of South America. Deciding that “God would call him to other things in life,” he left the priesthood and moved to Boston in 1970.

He married Bridget Reaney from Connemara in 1972, and both became active in Boston’s Irish community. Bill helped form the Shannon Blues Gaelic Football Club in 1974, and was active in the Gaelic Athletic Association, serving as Chairman of the New England Board and on the national board.

A recognized national leader on immigration, Bill helped launch the Massachusetts Immigration Committee in 1985, serving as its chairman. The group sparked a national movement for immigration reform that looked out not just for the Irish but for other ethnic groups seeking visas to enter the US legally. In fall 1986, Congress passed the US Immigration and Control Act which included the Donnelly Visa initiated by Dorchester Congressman Brian Donnelly.

When Bill passed away on September 16, 2017, his wake and funeral were held at St. Elizabeth Church in Milton, where he and Bridget were parishioners. Hundreds of people whom Bill befriended for nearly half a century in Boston came to pay their respects, while members of his family traveled from Ireland.

Fr. Finn and Parish priest Fr. Stephen Zukas were co-celebrants at the mass.

When he was named Sligoman of the Year in 2015, Bill was presented the award by Jim Brett, CEO of The New England Council, whose parents also came from Sligo.

"Bill was a legend in our Irish Community in advocating for just and fair immigration reform -- for all our brothers and sisters seeking a better future here in Boston, he was first. His advocacy will be missed," Brett said after the funeral.

Moss Keane from County Kerry remembers meeting Bill back in 1984 shortly after arriving in Boston.

“Bill was a mentor, a magician, a guru,” Keane says. “We developed a friendship over the next 30 years even though I would see him only three or four times a year. You could go to Bill with a problem and would leave deciphering a short story he would have imparted to you. He was not one to say “you should do this or that” but the answer would be in the cryptic story for you to figure out yourself.

“As I stood in the church at Bill’s funeral, I looked around to see tears in the eyes of many of us that came in the tide of immigration of the 1980’s. It makes one realize the impact he had in our lives and how much we will miss him.”