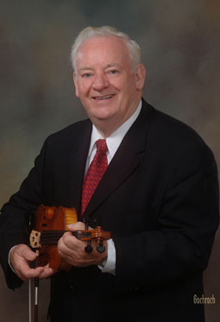 Bostons Irish community mourns the loss of fiddler Larry Reynolds, who died on October 3, 2012 at age 80. Larry had a huge influence on the regions Irish culture since arriving in Boston from Galway in 1953 at the age of 21. He was a key figure not just in the music scene, but also as a leader in the Irish-American community.

We have Larry to thank for sparking an Irish music renaissance in Boston and for spawning a young generation of musicians, singers and dancers to carry on his work. Dudley Street and the Village Coach House, Green Briar and Skellig Pub, Waltham High School and the Canadian American Club, plus countless kitchens, parlors, parish halls and sessions across New England, are all part of Larrys musical legacy.

He co-founded the Boston chapter of Comhaltas Ceoltoiri Eireann, which promotes Irish music around the world, and he supported countless cultural groups, fundraisers and civic occasions, often playing for free.

His musical skill notwithstanding, Larry is best remembered for his geniality and generosity to the people around him. He was always there to help a friend, and he encouraged thousands of fledgling musicians, young and old, to take up an instrument and enjoy the music as he did. He deeply and utterly loved his wife Phyllis, his six children and 21 grandchildren, many of whom became musicians too.

Many who knew Larry wish we could all go back in time and cherish once more his lively music, to hear him play Jackie Colemans Reel or the Bucks of Oranmore one more time, to sit down and buy him a pint, and thank him for his friendship and good company.

Our Tribute Page to Larry