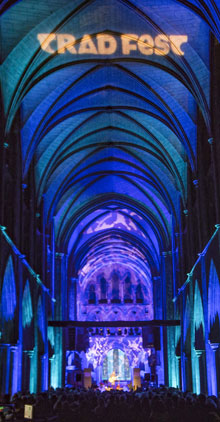 
One of Ireland’s great winter events for music lovers is the Temple Bar TradFest in the heart of Dublin each January. With a core line-up of Irish artists, TradFest also books leading artists from other countries. What began as concerts and sessions in local pubs has expanded to include marquee venues such as St. Patrick’s Cathedral, Dublin Castle and similar spaces. To find out more about TradFest 2019, which takes place January 23-27, we caught up with Artistic Director Kieran Hanrahan, a respected tenor banjoist, RTÉ Radio host and advisor to Comhaltas Ceoltóirí Éireann and Scoil Éigse.

Tell us briefly about TradFest, how it began and how it has grown.
TradFest Temple Bar started as an initiative of the local business people in Temple Bar in Dublin, known as the Cultural Quarter of the city. There are many pubs and restaurants in the quarter and most feature Irish traditional and folk music. Originally TradFest was a modest affair but it has grown in size and popularity since those early days and it has spread outside the environs of the quarter to take in historical and iconic venues.

How do you choose the line-up each year?
The search for talent is never ending and whereas the festival does feature household names, both local and international, our strong ambition is to host up-and-coming artists from Ireland. One mission of the festival is to provide a platform for these artists to perform in front of festival programmers from the US, the UK, Europe and others. We invite many of the leading festivals from outside Ireland to visit TradFest each year and the showcase element of the festival has proven very fulfilling for all concerned.

Can you describe the venues, which range from iconic churches and public buildings to restaurants and pubs?
All of the pubs have music daily but adding to that we have programmed high profile bands like the Furey Brothers, Stockton’s Wing, Sharon Shannon, Eleanor McEvoy, the Dublin Legends, the Kilkennys and more. These performances, called The Front Row Sessions, take place in the early evening or afternoon to suit those who might want to take in a night time concert also.


Among the iconic venues for TradFest is St. Patrick’s Cathedral and equally historic Dublin City Hall is central to the concert program. So too is the House of Lords, St. Michan’s Church and Rathfarnham Castle. All have a unique story and all are enchanting venues for traditional and folk music experiences. Of course the pubs and hotels of Temple Bar have their own colourful history too, having been frequented by many legendary writers, singers and musicians in the past.

There is no other set of venues quite like those of TradFest Temple Bar.

Where does your audience largely come from?
The majority of our audience comes from Dublin and Ireland but significant numbers come from the US, the UK and northern Europe. In recent years TradFest has partnered with the Milwaukee Irish Fest. Because of our visibility at Milwaukee we have developed an audience who travel from the US to Dublin in January for what is a very special experience.

TradFest works with Fáilte Ireland, Tourism Ireland, Culture Ireland and Dublin City Council. These are all essential partners and contributors in the festival’s success annually.

Will the concerts be broadcast by radio or TV?
At last year’s TradFest, TG4, a national TV station in Ireland recorded a series of concerts and performances throughout the festival. TradFest ar TG4 will be aired in the weeks before TradFest 2019. Also in 2019 it is planned to produce a weekly podcast featuring the artists at the various venues performing and chatting about their experiences. Of course, I usually broadcast the Trad Gala on Céilí House LIVE on Saturday nights on RTÉ Radio 1. There are many other radio programmes from TradFest also including Arena (The Arts programme), Roots Freeway, The John Creedon Show….

Traditional music has long been a defining aspect of Ireland’s culture. Can you reflect a bit on how TradFest stays true to longstanding traditions of music and song by offering an authentic portrayal of Irish expression?
Originally, TradFest started out as a way to lift the cobwebs after the winter and salute the coming spring, a fun festival where people could throw off the shackles of the dark winter and celebrate the year ahead. It is still that but it’s so much more, too.

TradFest is a glorious celebration of our culture and traditions. It is an expression of new development and innovation in the music and song of Ireland. It’s a platform for the established and the abundant emerging talent in some of Dublin’s most iconic and historic settings where both the artist and the listener are very much at ease.
TradFest is fun! Join us in January 2019.