Ireland’s lighthouses date back to the 5th century, when Irish monks established burning beacons on the Wexford coast.

Today there are hundreds of lighthouses dotting the Irish landscape; many of them are still active and used for maritime purposes, while others signify a rich historical past of interest to visitors and residents alike.

The Commissioner of Irish Lights operates over 70 lighthouses throughout Ireland, and recently launched a new initiative called Great Lighthouses of Ireland to highlight 12 of the most spectacular working lighthouses on the island. Organizers say it is an appropriate way to celebrate the history, tradition and heritage of these important maritime edifices.

Check out the dozen great lighthouses in Ireland below, and then plan to visit the rest!

FANAD HEAD LIGHTHOUSE
COUNTY DONEGAL
In 1812 the frigate HMS Saldanha was wrecked off the coast of Lough Swilly, with the only survivor being a parrot with a silver collar inscribed with the ship’s name. This prompted officials to build the Fanad Head Lighthouse, which was first lit five years later on March 17, 1817. Perched on the western shore of the Fanad Head Peninsula, the lighthouse has spectacular views of Tory Island, Dunree and Inishtrahull.

RATHLIN WEST LIGHTHOUSE
COUNTY ANTRIM
Rathlin Island is renowned for its bird colony, seals and wildlife. Robert the Bruce, King of the Scots, took refuge in a cave there before returning home in 1306. This “upside down” lighthouse is one of three on the island.

BLACKHEAD LIGHTHOUSE
COUNTY ANTRIM
Built in 1902, Blackhead Lighthouse beamed over the great Belfast ships of that era - Titanic, Olympic and Britannic as they left Belfast Lough for open water. Follow nearby coastal paths past sea caves in the Gobbins or south to Whitehead Resort.

ST JOHN’S POINT LIGHTHOUSE
COUNTY DOWN
Standing 79 feet above the Irish Sea, St John’s Point Lighthouse in County Down is the tallest onshore lighthouse on the island of Ireland. Created by famous designer George Halpin Senior in 1844, St. John’s is one of the places mentioned in Van Morrison’s song, Coney Island. It started out as white, then two black bands were added in 1902, and finally the yellow stripes in 1954. You can spend the night in the renovated lighthouse keeper’s house.

WICKLOW HEAD LIGHTHOUSE
COUNTY WICKLOW
Built in 1781, this octagonal stone tower overlooking the Irish Sea was struck by lightning in 1836, but the thick stone walls held. Today the lighthouse has six octagonal rooms that are rented to visitors who appreciate the nautical and natural landscapes.

HOOK HEAD LIGHTHOUSE
COUNTY WEXFORD
Built in the 12th century, Hook Head is the oldest continuously operating lighthouse in the world. Ancient stories trace the peninsula even further back to the 5th century, when a monk kept a beacon lit to warn sailors of possible shipwreck.

GALLEY HEAD LIGHTHOUSE
COUNTY CORK
Lightkeepers at Galley Head have witnessed many tragedies over the years such as the loss of the Lusitania in 1915, as well as British and German vessels during World War I and II. At 174 feet above the Atlantic Ocean, Galley Head was built in 1875 and was once the most powerful lighthouse in the world. Visitors can stay overnight at one of two light keeper houses on the grounds.

VALENTIA LIGHTHOUSE
COUNTY KERRY
Located atop a 17th century fort built to guard against invaders, the Lighthouse was first lit in 1841, designed by George Halpin Senior. Nearby is Skellig Michael – home to 6th century monks and today the film location for Star Wars movies.

LOOP HEAD LIGHTHOUSE
COUNTY CLARE
Loop Head Lighthouse was built in 1854, though earlier lighthouses on the spot date back to 1670. It sits on a peninsula voted as “The Best Place to Holiday in Ireland.” Visitors can rent the lighthouse keeper’s house overnight. 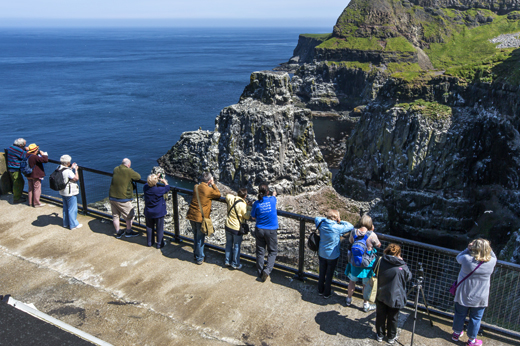