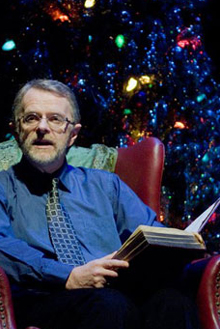 A decade ago, WGBH radio host Brian ODonovan staged the first Celtic Christmas Sojourn at Somerville Theatre, featuring his wife Lindsay, their children and a troupe of talented performers.

Modeled on traditional celebrations in his native County Cork, ODonovans blendof music, dancing, storytelling and poetry was an instant hit; this December there are eleven performances scheduled in five venues. We spoke to Brian about his memories of the first decade.

What was your initial plan for Christmas Celtic Sojourn?

I seriously thought about doing it in a church or even a church hall and doing it as a one- off. It was just an idea that grew out of the radio program and our own traditions at home around Christmas celebrations and gathering friends. When it sold out so quickly, I was amazed and thrilled. When we added an extra show the following year, and it sold out so fast we had to add a show, I began to think we had something going.

Christmas in New England and Ireland is laden with religious and family traditions that create wonderful childhood memories. What’s the mood you try to create for the show?

The Boston Globe paid us a big compliment, writing: “When most Christmas Shows come on like Red Bull, A Christmas Celtic Sojourn is more like a warm cup of Cocoa!” I want our audiences to take time out of their normal hectic lives, from that speed of living that is amplified at the holidays. To relax into the seats of a beautiful theatre and to feel like they are part of something real and ancient, very human and celebratory. To experience the joy of being together during the coldest time of the year, of surviving another year.

What is your favorite memory of the show?

One of my personal favorites was in our very first year. We put the whole show together in the afternoon at Somerville Theatre. It had been snowing and the (musical group) Cherish the Ladies got up from New York late. It was an exciting, tense, but fun atmosphere.

We didnt have a printed program for the audience to see, so one musical act was rolled out after another. My daughter Nuala walked on stage in a party dress and Mary Janes and sang a-capella a Welsh song called Calon Lan, (Pure Heart) which I joined in on the last verse. The audience was kind of stunned to see this very innocent, demure girl singing in a very clear voice, such a beautiful Christmas song. She got a standing ovation and our stage managers freaked because they were downstairs and thought they had missed the end of the show.

Whats the nicest compliment the show has received from its audience over the past decade?

I get so much feedback, literally hundreds of e-mails where people talk about their personal experiences, from making the show an annual family Christmas ritual to remembrances of special people no longer with us.

One of the most joyous e-mails I ever got was last year from a woman who requested a DVD of the show. She wrote, It would mean a lot to me, not only because we thoroughly enjoyed the performance but also, while at the theatre, I got engaged. My fiancé mentioned he was planning to propose later that evening at dinner, but he was so impressed by the beauty of the theatre and the music that he felt it was the perfect place for a proposal.