An exhibit entitled The Irish and Boston: An Immigrant Saga is running at the Massachusetts State House from June 10- 17, 2019. Developed by the City of Boston Archives under the leadership of Director Dr. John McColgan, the exhibit was first unveiled at the annual St. Patrick’s Breakfast hosted by South Boston’s State Senator Nick Collins in March. 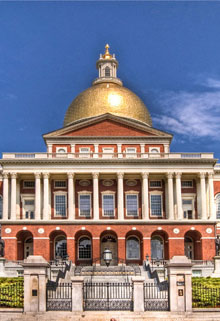 
It explores the illustrious Irish experience dating back to the early 1700s through today. Among the themes: the Irish role in the Revolutionary War; the bigotry toward the Irish in 19th century Boston; the mass Irish immigration to Boston propelled by Ireland’s famines and political unrest; and the Irish rise to political power in Boston that lasted throughout the 20th century. The exhibit also explores the history of the St. Patrick’s Day Parade in South Boston and its connection to Evacuation Day, a connection strengthened by Boston Irish patriotism and military service. The gradual tolerance for diversity in the parade is also explored.

Among the artifacts in the exhibit are political campaign posters and buttons of leading politicians like Hugh O’Brien, Patrick Collins, John “Honey Fitz” Fitzgerald, James Michael Curley and John Hynes.