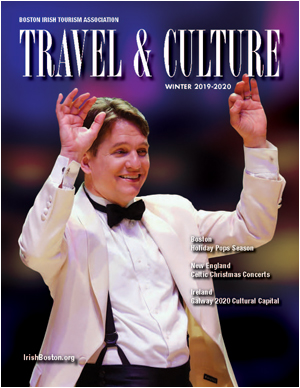 has released its winter 2019/20 issue of Travel & Culture, a compendium of Irish concerts, culinary, cultural and literary activities taking place in Massachusetts and throughout New England.

The magazine is distributed free at visitor kiosks and cultural venues throughout Massachusetts and is available in digital format online on BITA’s home page.

This issue has feature stories about Christmas music in New England, including Boston Holiday Pops, A Christmas Celtic Sojourn, and holiday shows at the Irish Cultural Centre, Blackstone River Theatre and other cultural venues.  Among the artists profiled are fiddler Liz Carroll and vocalists Chloë Agnew and Niamh Farrell.

Additionally, winter and St. Patrick’s Day activities leading up to March 2020 are included, from parades and concerts to cultural events and commemorations.

The “Ireland” section has stories about Dublin, one of the world’s great literary capitals, and Galway, which is officially named Europe’s cultural capital in 2020.  In addition, a schedule of popular group tours from Boston to Ireland is listed.

A map of the Boston’s Irish Heritage Trail, which is celebrating its 25th season in 2019, is included, along with descriptions of the 20 downtown and Back Bay sites along the trail.

BITA is celebrating its 19th year as a year-round, cultural tourism organization that promotes the state’s largest ethnic community.  The US Census reports that nearly 24% of all Massachusetts residents claim Irish ancestry.