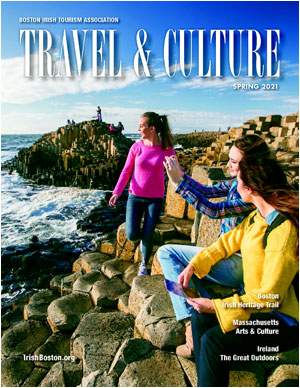 (BOSTON) -- This week the Boston Irish Tourism Association (BITA) issued its 2021 spring issue of Travel & Culture magazine, a compendium of Irish concerts, culinary, cultural and literary activities taking place in Massachusetts and throughout New England this spring, as well as travel tips for visiting the island of Ireland this year.

The pandemic has caused many of the traditional activities such as the state’s eight St. Patrick’s Day parades to be cancelled this year, and most of the cultural activities such as concerts, film festivals, dancing and lectures have gone virtual and are being enjoyed by viewers online.

On the culinary front, Irish organizations such as the Irish Cultural Centre in Canton, offer reserved dining that complies with the health and safety regulations issued by the Commonwealth of Massachusetts.  And Dine Out Boston, organized by the Greater Boston Convention & Visitors Bureau, is offering restaurant deals at 100+ eateries around Boston.

This issue has feature stories on local Irish-owned businesses such as The Burren Pub in Davis Square, Somerville, which celebrates its 25th anniversary in 2021, as well as the Irish Film Festival Boston, celebrating its 21st season.

Boston’s Irish Heritage Trail is featured in this issue, with a walking map and descriptions for self-guided tours along the 20 downtown and Back Bay sites.

When the time is right to travel, the island of Ireland remains a dream for many New England residents, and this issue has feature stories on Ireland: The Great Outdoors, and a story about Ireland as an ideal film location for some of the world’s most popular movies and television shows.

Finally, a copy of President Joe Biden’s Proclamation for Irish-American Heritage Month is included in this issue.

BITA is celebrating its 21st anniversary as a year-round, cultural tourism organization that promotes the state’s largest ethnic community. It publishes three annual issues of Travel & Culture each March, June and November.

For further details on festivals and concerts, as well as year-round Irish and cultural activities, hotel packages, gift shops and more, visit IrishMassachusetts.com.