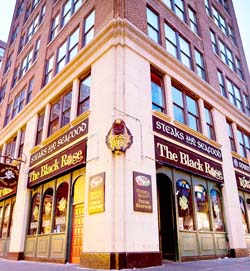 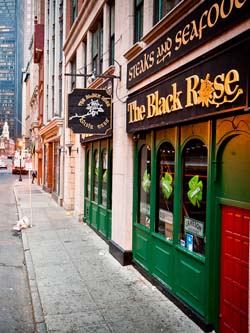 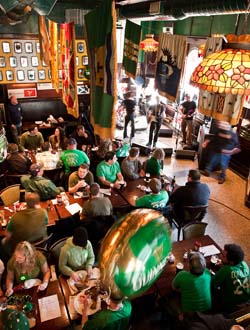 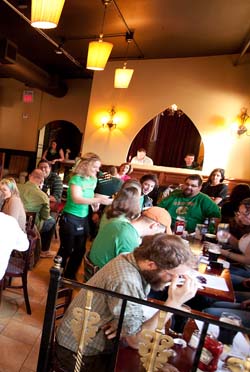 In the summer of 1976, Kevin White was mayor of Boston and Gerald Ford was America’s president.

Boston was busy celebrating the nation’s bi-centennial.  Faneuil Hall had not yet opened.  And Boston was in need of a good Irish pub.

Thankfully for this Irish-American city, Phil Sweeney and Richard McHugh were on hand to open the Black Rose (Roisin Dubh) Pub at 160 State Street that summer, ushering in an era of Boston Irish pubs that flourish to this day.

“In 1976, the only so-called Irish bars in the big cities in America were neighborhood bars, patronized by Irish immigrants,” Sweeney explains one morning over a cup of coffee at the pub he helped make famous.

“The Rose was the first pub in downtown Boston that was distinctly Irish.  We had traditional Irish music every night, poetry readings and pints of Guinness, and pretty soon people started sticking their heads in the door.”

Locals came from Boston’s neighborhoods, and politicians from City Hall, just down the street.  Office workers from the department stores, and college students stopped by.  Then Faneuil Hall opened, and pretty soon tourists started to wander into the Rose.  Everyone, it seems, headed there for the same reasons.

“When people go into a pub they want to enjoy themselves,” Sweeney explains.  “Here there is a sense of conviviality, enhanced by the music.  And it’s a place where people talk and have good conversations.”

Indeed, the Rose is more than just another watering hole. For the past thirty-five years, it has been a gathering point for people from all walks of life who appreciate the Rose’s chief ingredients: good atmosphere, good food and beverages, and good music.

It has been cited as one of the best pubs in America, and consistently one of Boston’s best pubs.  The Boston Business Journal called the Black Rose “the elder, but still vibrant, statesman of the Irish pub scene in Boston.”

Today the pub is owned and operated by the Glynn Hospitality Group, a family-owned restaurant business started by P.J. Glynn, who emigrated from County Galway to Boston some sixty years ago.

All of P.J.’s children – Michael, Christine, Neil, Brendan and Kelly – are involved in the company, which also owns the Purple Shamrock, Hurricane O’Reilly’s, Jose McIntyre’s, Coogan’s in downtown, Dillon’s in the Back Bay and Cleary’s and Brownstown in the South End. Sweeney still works for the company in a management capacity.

Paul Wilson of Dublin, the operations manager for the company, has worked there for twenty-two years, starting out as a doorman at the Purple Shamrock.

Wilson says that people from Ireland know about one or two pubs in each American city, and the Black Rose is on everyone’s list.  Word-of-mouth spreads fast.

“We get a lot of Irish tourists to Boston who stop for a pint at the Rose before heading off to the airport,” Wilson says.  “It’s almost like a tradition.”

The music continues to be a genuine draw for patrons frequenting the Rose.  “In thirty-five years, we’ve had music here every night, except for 9/11,” Wilson says.

And not just the paid musicians.  Wilson and Sweeney start talking about famous musicians who stopped by the Rose for a pint to check out the scene: James Galway, John Denver, Phil Lynnott, U2, the Chieftains…the list goes on.  Some of them – like Galway - even got up on stage and played a few tunes.

A newly renovated dining room on the second floor of the Black Rose has brought a new crowd of patrons who enjoy great pub food and fresh fish caught daily right in Massachusetts.    The second floor also serves as a function room for local parties and luncheons.

Lately, social networks like Facebook and Twitter are spreading the fame of the Black Rose even further.  And that’s fine for Sweeney, Wilson and the Glynn family, who all know that word-of-mouth is what has made the Black Rose Boston’s enduring Irish pub for the past thirty-five years.