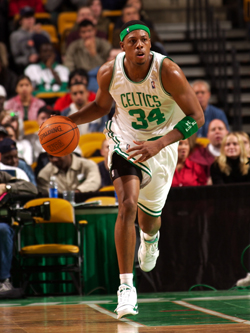 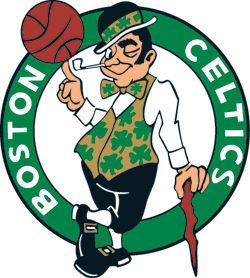 Many people wonder why the Celtics wear shamrocks on their green uniforms and have a giant leprechaun smoking a cigar as their team logo.  And why the team mascot is a guy named Lucky who looks like he stepped out of a box of Lucky Charms?

According to the Boston Celtic’s official web site, the name came about in 1946 when owner Walter Brown started the team.  He and his public relations guy, Howie McHugh, were throwing out potential nicknames, including the Whirlwinds, Unicorns and Olympics.

It was Brown who had the epiphany, saying, “Wait, I’ve got it – the Celtics.  The name has a great basketball tradition from the old Original Celtics in New York (1920s).  And Boston is full of Irishman.  We’ll put them in green uniforms and call them the Boston Celtics.”

Red Auerbach, the now legendary coach of the early Celtics, then commissioned his brother Zang, a graphic designer in the newspaper business, to come up with the famous Celtics logo in the early 1950s.  The logo manages to include all of the iconic depictions of the Irish in America that were standard in the 1950s: a leprechaun covered in shamrock clothing and a bowler hat, smoking a pipe, holding a shillelagh and sporting a mischievous grin!

The logo is said to have brought the Celtics good luck, since they won their first championship in 1957, so it has remained.

With Banner # 17 now hanging from the rafters of the Boston Garden, may we loudly proclaim and celebrate the luck of the Irish!