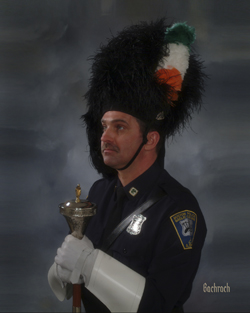 BOSTON POLICE GAELIC COLUMN OF PIPES & DRUMS @ 25
IN STEP, IN TUNE, IN DEMAND

Congratulations to the Boston Police Gaelic Column of Pipes & Drums, celebrating its 25th anniversary this year. The band got it start in November, 1991, when a group of Boston cops met at Doyle’s Café in Jamaica Plain, intent on forming a band to honor fallen comrades in the years to come. Since then they have played at thousands of occasions not just in Massachusetts but across North America and in Ireland.

We caught up with Jim Barry, President and Drum Major, and one of the founders of the group.

A quarter century – wow. How many of the original members are still in the band?

We still have 6 original members, out of 30 active members. Three of the four original founders are still active also.

You’ve traveled the world performing at parades and concerts, what stands out as the common denominator?

I’d have to say that it is people’s reaction when they first see and hear us playing the pipes. First off is our uniform, being that we have a solid navy blue kilt and police uniform shirt with our badge. Secondly is the majority of our music is very Irish. If you look at the typical American bagpipe band, they try to emulate the Scottish sound.

Tell us about your annual tradition of performing at the Franciscan Hospital for Children each St. Patrick’s Day? 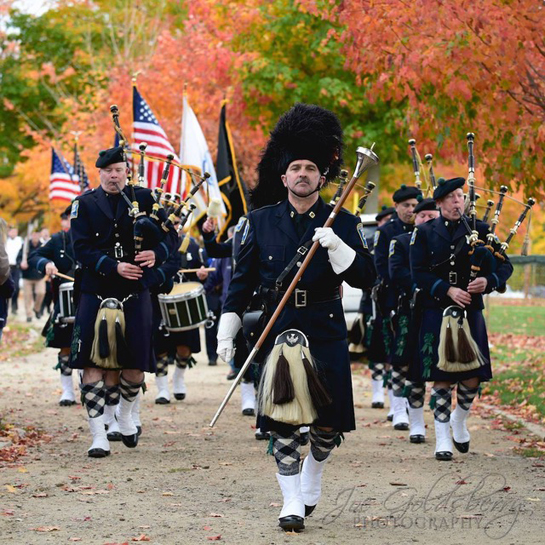 Our very first year performing, the band wanted to bring Saint Patrick’s Day to kids that might not be able to make it out to the parade. So we proposed to Franciscan Hospital for Children that we would start our day marching and playing Irish bagpipe music throughout the wards and rooms of the hospital. Here we are 25 years later and we still look forward to spending time with these kids. It is the highlight of our day.

The Gaelic Column takes such great pride in representing the city of Boston, anywhere. But, when you’re in another country, it takes on a special responsibility. We always strive to look, sound and be at our best. Having won a number of awards for marching in Cork’s Saint Patrick’s Day Parade, Cork has a very special place in our hearts. Marching and performing in the land of our ancestors was a spiritual experience for many of us.