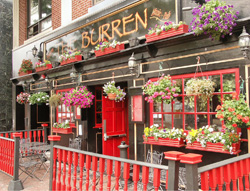 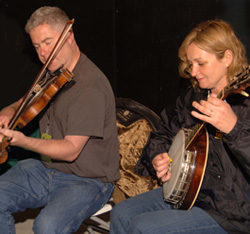 
It’s named for a barren expanse of Limestone rock in Ireland’s County Clare, but there’s nothing barren about the Burren Pub in Davis Square, Somerville.

Since opening its doors in January 1996, the Burren has been a Mecca for people from around the world who play, aspire to play, or simply appreciate great traditional Irish music. The Chieftains, Altan, Lunasa, even Bono and the boys from U-2 have made a pilgrimage to the Burren to sample some of the best Irish music in North America.

Naturally enough, since the pub is owned by two great traditional musicians: fiddler Tommy McCarthy and his wife Louise Costello, a champion on the banjo and accordion.

The couple met in Boston in 1986, moved back to Ireland and got married, traveled the world, and then returned to Boston in 1994. They decided to open a pub so they could play music anytime they wanted.

Tommy recalls how the pub got started. “I saw an ad in the paper for a liquor license for sale in Somerville and we decided to go for it. Davis Square was all boarded up at the time, but the Somerville Theatre right down the street was ready to grow with World Music, so we took our chance.

“My dad, a master carpenter as well as a concertina player, came out from London and helped us build the front room of the Burren, including the bar.

“The Burren was an instant success from the day we opened. There was a huge draw. A year later, we opened the Back Room, with a 250 seat capacity, bringing in a whole range of rock, blues, jazz, and country bands.”

In fact, the pub was just named “Best Neighborhood Bar” by Boston Magazine for 2010, and had this to say:

“When it comes to evaluating a neighborhood pub, you want to hang out there every day. For 14 years, the Burren has been meeting this requirement for hundreds of regulars. They don’t return again and again for the standard Irish fare (bangers and mash, fish and chips), though this is as solid as it comes. They return because the back room features weekly music and comedy, because the bar isn’t dominated by flat-screens, and because the lived-in comfort feels like home, only better.”