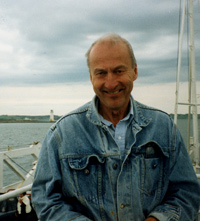 You worked for President Kennedy as a congressional liaison in the White House. How did you first meet him?

In 1959 I was working for Congressman Stuart Udall from Arizona, later the Secretary of the Interior. John Kennedy was an up and coming senator, and I met him at that time. He was relaxed, smart, impressive, and his ambition went far beyond most representatives of the senate.

How has the JFK Library carried on President Kennedys ideals?

The Library lives up to the best of President Kennedys ideas of peace and justice. One of the first places Nelson Mandela came to after years in prison was the JFK Library. After all the years that he was in prison he felt a tie to President Kennedy, and also because of Robert Kennedys visit to South Africa. I worked in South Africa on AIDS and the Kennedy ideals are still strong there, and in other parts of the world.

Today the Library lives up to these ideals on many levels. Theres a library program for young children from Dorchester, naturalization ceremoniestheres a real broadness and depth to the programs here.

What does the Library want to impress upon visitors about the Kennedy legacy?

To me the Kennedy legacy is all too brief. But as you go through the Library you begin to feel that the Kennedy legacy is part of the whole of Americas legacy  Im talking now about peace, justice, culture and the ability to be strong but not to be waving a gun. Never negotiate through fear but never fear to negotiate. And not just on the foreign front  if you look at where we were  particularly in the Civil Rights exhibit  which to me is still heart-wrenching - weve got a long way to go but weve come a long way from that.

It wont be an exaggeration to say that President Kennedy was really a leader in advancing what is best in America, and trying to outline what that best is.