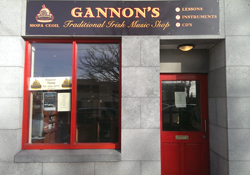 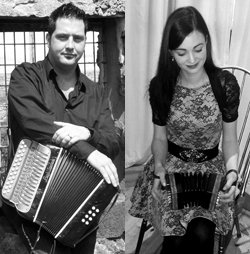 
If you’re looking to discover one of Ireland’s most authentic stops along the Wild Atlantic Way, then take the Spiddal Road out of Galway City and drive about a dozen miles until you reach Spiddal, a beautiful seaside village where students from around the world travel to learn the Irish language and to immerse themselves in pure Irish culture.

It is here you’ll find Gannon’s Traditional Irish Music Shop, run by two outstanding traditional musicians, Colm Gannon and his wife Kelly. The shop opened last year, and already has become a gathering spot for locals and visitors alike who cherish traditional Irish music. With a fine selection of CDs, tapes and records, a variety of tune books, and some exquisite instruments, like the Bosca Ceoil button accordion made by Italian instrument master Manfrini, the Gannons’ specialize in instrument accessories and advice on where to find the best nightly music.

A main feature of the shop is the music school on the premises. Kelly (Geraghty) Gannon is a classically trained pianist and brilliant concertina player, and teaches classes, along with Colm on the accordion and other accomplished musicians like Ronan O’Flaherty on fiddle, Padraig O’Dubhghail on guitar, Pádraic Keane on pipes, Tommy Walsh on Flute and Brian McGrath on banjo.

Born and raised in Boston’s Dorchester neighborhood, Colm comes from a distinguished family of accordion players, including his dad John Gannon, who is originally from Droim, Leitir Mor in Connemara, and Colm’s older brother Sean, also an excellent accordionist. Colm and Sean’s mom, Gerry Gannon, comes from nearby Tuirin. In 1994, Colm was one of the few American players to ever win the prestigious All Ireland button accordion championship, and he toured with Riverdance for several years before getting his master’s degree in music performance at the University of Limerick.

Colm grew up down the street from Boston’s new Mayor, Marty Walsh, in a Connemara community in the heart of Dorchester that was a home away from home for his parents. He recently talked about the “spirited and passionate” people of Connemara who helped shape him and his music.

“It’s the pride of culture and community that the Connemara people hold so strong and instill in the next generation that have kept them together,” he said. “The love and respect of their people, history, language, music, song and dance was passed on from generation to generation. This was integral in keeping the community strong and bringing them together.”

Colm said he was so influenced by his Connemara upbringing in Boston that he and his wife Kelly decided to settle down here and open the shop. He wants Gannon’s Traditional Music Shop to be a place for the people of Ireland and tourists alike to come and share the Connemara spirit, the love of music and the sense of camaraderie that drew him back to his second home away from home.