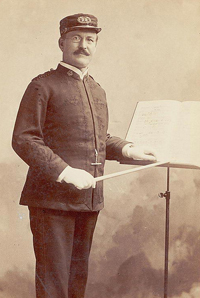 One of the enduring songs from the 19th century is When Johnny Comes Marching Home Again, first published in Boston by musician Patrick Sarsfield Gilmore.

The song was part of the musical literature of the American Civil War, and subsequent wars for that matter, since it captures the sentiments of families waiting anxiously for their loved ones to return home safely from battle.

Gilmore published the song in 1863. : The melody and lyrics were clearly influenced by an old Irish ballad called, Johnnie I Hardly Knew Ye, said to be popular with Irish soldiers fighting for the British Empire in Ceylon in the early 1800s.

The Boston Public Library’s Rare Books Department has a copy of the original lyrics, which are dark and foreboding:

Where are the legs with which you run,
When you went to carry a gun?
Indeed, your dancing days are done,
Och, Johnnie I hardly knew ye.

When Johnny Comes Marching Home Again
Hurrah, Hurrah,
We’ll give him a hearty welcome then,
Hurrah Hurrah
The men will cheer and the boys will shout,
The ladies they will all come out
And we’ll all feel gay
When Johnny comes marching home

Gilmore’s song has several important qualities.  It is written in 2/4 time and played as an upbeat march, with a tempo of enthusiasm and optimism perfect for brass bands or marching bands.

The lyrics are non-specific, so Northerners and Southerners – and subsequent listeners - related to the song equally.  And the song has a neutral political tone, offering a universal shred of hope and celebration, not for victory, but simply for safety and survival.

Gilmore was one of America’s most influential musicians and impresarios, according to Michael Cummings of Milton, an expert on Gilmore’s life and founder of the Patrick S. Gilmore Society.

Born in Ballygar, County Galway on December 25, 1829, Gilmore grew up in a tumultuous Ireland wracked by political dissent and famine.  He arrived in Boston in 1849, part of the mass exodus of Irish refugees fleeing the potato famine in that decade, Cummings notes.

Gilmore was a gifted cornetist who quickly found work in Boston and conductor of  the Salem Band.  Eventually he formed his own group, simply called Gilmore’s Band.

“When the Civil War broke out in 1861, Gilmore’s band enlisted in the 24th Massachusetts Regiment, accompanying the soldiers to the front,” Cummings says.

After the war, Gilmore organized a National Peace Jubilee in Boston in June 1869, featuring 1,000 musicians, 10,000 choral singers, and 6,000 Boston schoolchildren.  He built a giant coliseum to hold 50,000 people in Boston’s Back Bay, where the Copley Plaza Hotel and Hancock Towers now stand.

When that Jubilee ended, Gilmore spent the next twenty years touring North America and Europe with the Gilmore Band.  He died in September 1892 while on tour in St. Louis.

Cummings notes other Gilmore innovations.  “He started the first promenade concert on July 4, 1855, on Boston Common, which became the forerunner of today’s Boston Pops concert on the Esplanade,” he says.  “And it was Gilmore who initiated the now familiar tradition of greeting the New Year in Times Square, New York City.”

But Gilmore’s legacy lives on in his most popular song, When Johnny Comes Marching Home Again.  It became popular again during the Spanish-American War of 1898, and in both world wars.

It has been recorded by numerous artists, ranging from jazz organist Jimmy Smith to the Dropkick Murphys, and is played in high school bands, military bands and orchestras around the world.