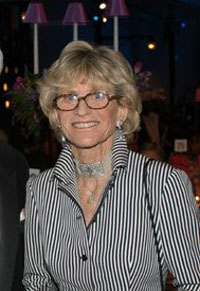 Jean Kennedy Smith - Contributions to Politics and the Arts


She has certainly lived up to her family name. Jean Kennedy Smith, sister of President John F. Kennedy, could have readily rested upon the laurels of the illustrious Kennedy name, but she never did.

Instead, she charted a distinct path of public service over her lifetime: celebrating the artistic potential of special needs children around the world; turning the Kennedy Performing Arts Center into one of Americas most prized cultural venues; and contributing to the Northern Ireland peace talks as the US Ambassador to Ireland in the 1990s.

In recognition of these achievements, the Eire Society of Boston bestowed on Smith its prestigious Gold Medal Award at a special awards dinner on May 3, 2007 at the Boston Park Plaza Hotel.

In accepting the Gold Medal, which has been awarded annually by the Eire Society since 1945, Smith joins a list of distinguished winners that provides an important reference point for Irish and Irish-American achievement over the past seventy years.

Ambassador Smith exemplifies the Irish-American spirit as represented by the Gold Medal award, said Edris Kelley, president of the Eire Society. We commend her for the central role she played in the peace efforts in Northern Ireland and for her humanitarian efforts on behalf of children with special needs.

Fittingly, Smith is receiving this years Gold Medal 50 years after her brother, President Kennedy, received it in 1957, when he was a newly elected junior senator from Massachusetts.

Smith, along with her sister Eunice, traveled with President Kennedy to Ireland in June 1963 for the presidents final trip to his ancestral homeland, which JFK later described as the happiest four days of my life.

In addition for their mutual love of Ireland, JFK and Smith also shared a unique commitment to the arts, noted the Eire Society in a citation being presented at the Gold Medal dinner.

"The life of the arts, JFK wrote, far from being an interruption, a distraction, in the life of a nation, is very close to the center of a nations purpose ...and is a test of the quality of a nations civilization."

That quote is inscribed at the Kennedy Center for the Performing Arts in Washington, which Smith has nurtured into one of the nations premier venues for expressing American culture in all of its artistic forms.

In a similar vein, Smith formed Very Special Arts in 1974, a nonprofit group that championed a social climate where people with disabilities could participate in and enjoy the arts. The group, now named VSA Arts, virtually ushered in a new era for special needs children by developing arts programs, athletic competitions, and advocacy programs in the United States and then around the world. Today VSA Arts operates in over 60 countries.

Bill ODonnell, past president of the Eire Society, noted, The journey of Jean Kennedy Smith has been a remarkable amalgam of honors and hard work: a life enriched by her labor in behalf of peace, public service, the disabled in the arts, and, always, the common good.

The quest for the common good extended to the political realm as well, where Smith and her siblings have always felt at home.

On March 17, 1993 newly elected President Bill Clinton nominated Smith to serve as the US Ambassador to Ireland, and she was confirmed the following June.

Bucking the often plodding and bureaucratic culture of the State Department, Smith quickly acted upon her interest in the Northern Ireland peace process, causing mild alarm among career diplomats and the media.

A New York Times editorial in March 1996 referred to Smiths excessive zeal, in her ambassadorial post. By all accounts, the Times wrote, Mrs. Smith has brought enthusiasm, fresh ideas and political leverage to her post, but hasalso run afoul of rules.

Eager to break new ground in the arid arguments over British rule in Northern Ireland, she pressed early in her tenure for inclusive peace talks that would bring to the table Sinn Fein.

That excessive zeal, of course, proved to be decisive in launching a new era of discussion and reconciliation that led to the Easter Agreement in April 1998, and part of Smiths legacy will revolve around her diplomatic acumen.

Jean did a brilliant job as Ambassador to Ireland, said her brother, Senator Edward M. Kennedy. She earned the respect of officials from North and South alike for her impressive diplomacy and was beloved by all the people of Ireland for her tireless efforts to achieve peace. Shell be long remembered for all she did to enable future generations  regardless of their background  to share in Irelands promising future.

"Ambassador Smith was a crucial catalyst at a moment in Irish history when peace hung in the balance. Her wisdom and tenacity made all the difference -- and the historic March 26 Adams-Paisley Stormont summit is proof of that," says ODonnell.

Raymond L. Flynn, who served as US Ambassador to the Vatican alongside Smith, said, "Jean served the United States proudly and capably as U.S. Ambassador to Ireland during the historic breakthrough years, when peace and justice where on the move in Northern Ireland. She deserves our everlasting admiration and respect.

When Smiths five year tenure as Ambassador to Ireland came to an end in 1998, Irelands Prime Minister Bertie Ahern quickly acknowledged that her contribution has been unique, and will find honorable mention in all the history books that will be written of this period.

In a July 4, 1998 speech marking Independence Day, Ahern continued, Above all I would like to express our gratitude for her single-minded commitment to peaceIn the advice she gave, and in the contacts she maintained especially in times of difficulty, she knew exactly what she was doing and the vital importance of it.

"Finally," Ahern said, When President John F. Kennedy came to Ireland in 1963, he told the Houses of the Oireachtas, that we need people 'who can dream of things that never were and ask why not'. His sister Jean has been one of these people, and we are deeply grateful to her.