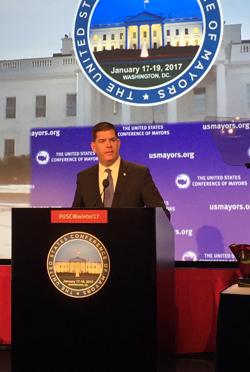 In January, Boston Mayor Marty Walsh received the 2017 Public Leadership in the Arts Award from the national advocacy group, Americans for the Arts.

Mayor Walsh received the prestigious award at the US Conference of Mayors winter meeting, a gathering of mayors from across the country. Boston won the top prize for cities with a population of over 100,000.

Robert L. Lynch, president and CEO of Americans for the Arts, cited Walsh for “exceptional leadership and commitment to the arts.”

“Art and culture help shape a city’s quality of life and economic vitality,” said Tom Cochran, head of the U.S. Conference of Mayors. “Mayors understand the connection between the arts, business and tourism and the arts’ significant impact on local economies.”

In accepting the award, Walsh said, “We want to see art everywhere in our City, even in unexpected places. Art matters to everyone and we’re breaking down barriers to make the arts more accessible to everyone.”

When Walsh took office in 2014, he launched a year-long study called Boston Creates, which produced a 10-year Cultural Plan. The plan calls for $1 million in artist-in-residence grants, and created a full-time position to administer the grants. Julie Burros, a national arts professional from Chicago, was appointed Boston’s arts czar, a cabinet-level position in the Walsh Administration.