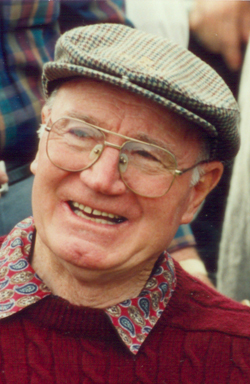 Michael J. Cummings of Milton, Massachusetts died on Saturday, October 1, 2011 after a decade long battle with Lou Gehrig's Disease. He was 87 years old.

In the fields of Irish sports, music and dance, cultural heritage and immigration reform, Cummings was a formidable leader in Boston’s Irish community for over sixty years.

Mike arrived in Boston in 1947 from Ballygar, County Galway as a heralded young football star.  His talents as an athlete were immediately on display as he led the Galway Football Club in Boston to five consecutive championships from 1948-1952.  He was elected the youngest president of the Gaelic Athletic Association in New England, a group he continued to support through his life.

In the 1950s, Mike became active in Boston’s Irish cultural community, teaching set dancing classes at the Intercolonial Hall in Dudley Square, Roxbury and at Harvard University.  He joined and supported Irish cultural groups like the Eire Society of Boston, Charitable Irish Society, Galway County Club and many similar groups.

His leadership and knowledge were sought on many fronts.  In 1956 he helped the popular NCB television series, Wide Wide World, film a documentary on Boston’s Irish community, where Mike himself was interviewed on both the fine points of football and set dancing.

In 1964, when the Kennedy family took steps to create a presidential library for John F. Kennedy, Mike helped form the Irish American Committee for the John F. Kennedy Memorial Fund, which allowed small donors to contribute and feel part of the JFK legacy.

Mike’s most lasting contribution to Irish heritage may be his extraordinary work over five decades on the life and music of Patrick S. Gilmore (1829-92), the great 19th century bandleader and composer who was born in Mike’s town of Ballygar, Galway.

Gilmore’s name was nearly consigned to the footnotes of history until Mike became interested.   In 1968, he formed the Patrick S. Gilmore Society, a musical appreciation group that organized annual band concerts on Boston City Hall Plaza and the Charles River Esplanade, encouraging a new generation of musicians to rediscover Gilmore’s music.

Using original research he conducted over years at the Boston Public Library and through public records, Mike wrote numerous articles about Gilmore’s life and lectured frequently at the Eire Society, Milton Historical Society, and local libraries. In1972 he helped archivists organize an exhibit at the Boston Public Library on Gilmore’s musical accomplishments, and got Ireland’s Tourist Board to unveil a plaque to Gilmore in Ballygar.

In 1992, to commemorate the centenary of Gilmore’s death, Mike led a fund raising drive to finally put a gravestone at Gilmore’s grave at Calvary Cemetery in Queens, New York.

In 2004, Mike donated his extensive collection of Gilmore research, music, lithographs and ephemera to the John J. Burns Library at Boston College.  Mike’s dedication to Gilmore lasted until the final months of his life, as he continued to respond to inquires from musicians, educators, doctoral students, genealogists and historians from around the world.

In a similar vein, Mike undertook considerable research on Lawrence Logan, also a Ballygar native who lived in Boston and was an acclaimed military leader, commanding the 26th Yankee Division during World War I.  Boston’s Logan International Airport is named after Logan’s son Edward.

As an amateur historian, Mike’s curiosity extended beyond the Irish: in 1976 he was Chairman of the Bi-Centennial Committee of Milton, Massachusetts.

Throughout his life, Mike was generous in offering his leadership and talents to Irish causes.  When illegal Irish immigration became a pressing issue in the 1980s, Mike and local Irish leaders formed the Massachusetts Immigration Committee, enlisting US Congressman Brian Donnelly to help amend America’s immigration laws.

In July 1986, Mike traveled with his longtime friend Thomas J. Flatley to Washington, DC, where Flatley testified in favor of the Donnelly Visa Bill, which passed and gave relief to nearly 20,000 Irish immigrants. This activism in Boston  led to the formation of Boston's two immigrant service centers: the Irish International Immigration Center and the Irish Pastoral Centre.

In the 1990s, Mike and Tom Flatley formed the Boston Irish Famine Memorial committee, which raised $1 million to build a Famine Memorial Park in downtown Boston to commemorate the 150th anniversary of the Irish Famine. The park opened on June 28, 1998, with 7,000 people attending. In addition to helping select the memorial location, Mike was one of the wordsmiths who crafted the narrative on the eight plaques encircling the Memorial.

Tom Flatley wrote about his friend:

“Mike Cummings is a man of commitment to his God, his family, his country and in particular his ‘old country.’ For close to half a century, Mike has been my friend, my historian and a man who on numerous occasions told me during moments of hesitation, ‘Tom, you can do it.’  After a few minutes with Mike, I would feel as if I could build the Empire State Building.”

Mike’s lifelong devotion to the Irish community provided him with many awards and acclamations during his life.  Among these awards:

The New England GAA honored him at its 1976 annual banquet, “for the tremendous contributions to the games and traditions of his native land.”

In 1999 the Famine Memorial Committee gave Mike a special proclamation and ceremony for his great contribution to that project.  And the Irish Cultural Centre and GAA recognized Mike at the ten year anniversary of the Centre.

In 2005 the Charitable Irish Society bestowed its prestigious Silver Key Award to Mike “for his visionary leadership and grassroots activism.”

Mike’s influence, leadership and contributions to Boston’s Irish community and to Ireland will remain intact for many years to come.