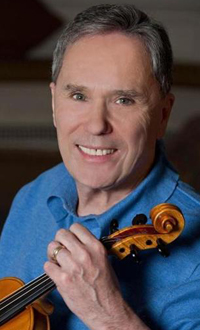 
And why not: the ten-time All Ireland fiddle champion has been learning, playing and teaching thousands of Irish melodies for upwards of half a century, since he took up the fiddle as a child in Killaloe, County Clare.

Connolly has been at the center of the region’s vibrant Irish music scene since he emigrated from County Clare to New England in the 1970s, inspiring new generations of students to take up the fiddle, while also connecting with other musical proponents of Cape Breton, Scottish, French Acadian, and American old time genres.

As the Sullivan Family Artist-in-Residence at Boston College, he has been working with music archivist Beth Sweeney to catalog and digitize thousands of tunes he’s collected from old 78s found in basements, reel to reel recordings Connolly made in Ireland during the 1960s, tape cassettes music lovers sent to him in the mail, and from the wilds of Nova Scotia, County Kerry and Appalachia.

From this pastiche of sources, Connolly is putting together a book of about 350-400 stellar tunes that deserve to stay in the active repertoire of traditional music which could then be played by Irish musicians the world over.

The book – tentatively called Music: My Life – will include transcriptions of the tunes by Berklee College teacher and ace mandolin player John McGann.

“The transcriptions will be in simple form, so that students can learn the basic tunes,” Connolly says.

A companion set of CDs will include recordings of the original settings – often in unusual keys - by legends like Julia Clifford or Larry Redican followed by contemporary interpretations of the same song by today’s artists from musicians ranging from Kevin Crawford and Eileen Ivers to Kevin Burke Martin Hayes and Gerry O’Sullivan.

In addition to the rare old tunes, Connolly is including a number of brand new compositions by leading Irish musicians – Liz Carroll, Joanie Madden, Finbar Dwyer and Connolly himself.

The book will include cross-genre interpretations of Irish tunes such as Cape Breton fiddler Kimberly Fraser playing tunes recorded by Northern Ireland fiddler Sean Maguire in 1969.   And it contains a few dozen songs representing traditions like Prince Edward Island and other places Connolly has visited throughout his musical journeys.

“There’s up to one hundred people involved in this project,” Connolly says from his home in Maine, where he lives with his wife Sandy Walter, who helped organize the influential Gaelic Roots Summer School at Boston College in the 1990s.

“Working at BC gives me a lot of leverage and allows me the time to work on this collection, which will end up in the college archives,” Connolly says, adding that the “musicians are giving up their time” to contribute to the project.

“I’ve had this idea for years,” Connolly says about the hundreds of tunes he’s tracked down and discovered over his lifetime.  “It would have been a pity not to have them out there.”