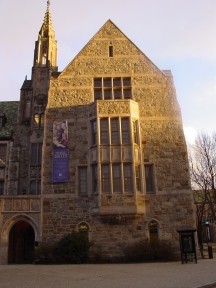 "Each year, the Boston College Arts Council recognizes an alumnus, a faculty member, and several students for their accomplishments and contributions to the arts in various disciplines," according to the Arts Council press release.  "Alumni and faculty award recipients serve as role models, inspiring and guiding developing young artists in the BC community."

Connolly is the "Sullivan Artist in Residence" at Boston College, and one of the most accomplished Irish musicians of his generation, as performer, composer, publisher and educator.  The County Clare native formed BC's Gaelic Roots program in 1991, and since then the program has brought to campus the world's finest performers in Irish, Scottish, Canadian and American folk traditions.

In September 2013 Connolly was awarded a National Heritage Fellowship from the National Endowment for the Arts, and in May 2103 he received the Ellis Island Medal of Honor for his distinguished work in music.  Connolly is also a scholar, researcher and compiler of rare melodies.