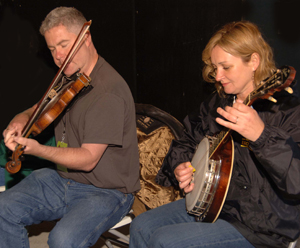 Tommy McCarthy and his wife Louise Costello are musicians and owners of the Burren Pub in Davis Square, Somerville, considered one of the best places to hear traditional Irish music in the United States, if not the world.  We spoke to Tommy recently from Ireland, where he was home with his family.

Tell us about your own background as musicians.

My family comes from West Clare, and I grew up in London in a very musical environment.  After my three older sisters, there was a gap of five years, so by the time I was eight or nine they were already playing around London in the Irish Centers and pubs, so it seemed inevitable I would be part of the music scene.

I didn’t show any signs of playing until I was about twelve, when my father bought me a mandolin.  I started playing the fiddle at about thirteen, and I knew my dad was very happy that I was taking up the family tradition.  Bobby Casey started teaching me a bit, and at about fifteen I started playing at the Irish Centre in Camden Town with banjo player Mick O’Connor and Sean Casey, Bobby’s son.  We played mostly at the Victoria Pub on Holloway Road in North London.

Louise comes from Tulloughmore, County Galway.  A nun at her school was putting a Ceili Band together and went out and bought a banjo for Louise.  And she used to go around to the local sessions with her father, an accordion player, and played a lot with DeDannan and other bands around Galway.


How did you and Louise come to start-up the Burren Pub, which you opened in 1996?

Louise and I first met in Boston in 1986.  We were playing sessions at the Brendan Behan in Jamaica Plain. We eventually moved back to Ireland, got married, traveled around the world and then came back to Boston in 1994, where we still had a bit of a following.  We decided to open our own pub where we could play music whenever we liked.

I saw an ad in the paper for a liquor license for sale in Somerville and we decided to go for it.  Davis Square was all boarded up at the time, but the Somerville Theatre right down the street was ready to grow with World Music, so we took our chance.

My dad, a master carpenter as well as concertina player, came out from London and helped us build the front room of the Burren, including the bar.

I remember a week before we opened, we were painting the last few walls with our friend Neilus Reynolds till about eleven o’clock at night.  We went across the road to Red Bones for a beer and the guy was mopping up the floor, there were no customers left. We went over to Sligo Pub, where there were about five people.  We looked at each other and said, ‘what have we gotten in to here?’

But the Burren was an instant success from the day we opened.  There was huge draw.  A year later, we opened the Back Room at the Burren, with a 250 seat capacity, bringing in a whole range of rock, blues, jazz, and country bands.


The Front Room of the Burren remains the traditional session headquarters.  Were there any sessions that stand out in your memory?

There were so many.  I remember one time a crew came over to tape a session for Irish television.  They started filming at ten in the morning, but wanted it to look like an evening session, so we put black plastic bags on all the windows.   We had Seamus Connolly, Paddy Cronin, and Tommy Peoples on the fiddles and Joe Derrane on accordion.

Another session that springs to mind is with the band Altan, who played at the Somerville Theatre and had the next day off.  They started playing tunes in the pub around mid day and kept playing till the wee hours.

My three sisters and their husbands have all been here to play, and my dad has played here a lot.  Louise’s dad got his first passport at age 80 and came out here to play the accordion.  Those were all great sessions.


You have two other pubs – the Skellig in Waltham and the Shaskeen Pub in Manchester, NH.

Yes, those are also popular places modeled after the Burren, with traditional music in the front and a range of music in the back room.  We also serve good food, moderately priced, and open the back room for weddings and other functions.  But the music is the main attraction.