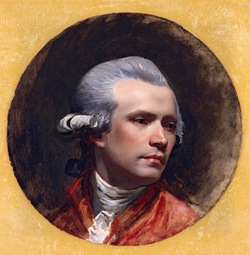 In the early 1700s, Irish and Scottish settlers began infiltrating Boston’s solidly Puritan stock, coming by the boatload or as stragglers wandering up from New York of down from Halifax.

They were indentured servants and small town merchants, sailors and mercenaries, farmers and preachers.  Before basketball was invented, these were the original Boston Celtics!

Many of the settlers from Northern Ireland – known then as Ulster Scots – were skilled craftsmen and merchants, while the Irish from Cork and Galway came as indentured servants.  Many of the servants took to the hills the first chance they got, alongside African slaves and American Indians escaping their captors.

Others, like Owen Sullivan from County Cork and his wife Mary Browne, - indentured servants who settled in Maine in 1740 -  worked through their indenture (usually 5-7 years) and built their own family dynasty.  Their son John Sullivan became a general in George Washington’s Army, while James became the second governor of Massachusetts.

John Singleton Copley, America’s first great portrait painter, was the son of two Irish immigrants from County Limerick.   Copley Square in Boston’s Back Bay is named in his honor.

One of the five victims of the famous Boston Massacre of 1770 was Patrick Carr, an Irish sailor who was shot down by the British soldiers, who themselves had Irish names like Thomas Preston, Hugh White, John Carroll and William McCauley.

Carr is buried at the Old Granary Burying Grounds, along with other Irishmen like Robert Treat Paine and William Hall, president of the Charitable Irish Society, which formed in 1737.

The Battle of Bunker Hill in Charlestown was filled with Irish fighters, on both sides!  More than 200 Irish-born soldiers fought at the famous battle on June 17, 1775.

John Barry from County Wexford, a naval hero in the Revolutionary War, has a plaque in his honor on Boston Common, next to the Visitor Center.

At the State House, you’ll find a plaque to another naval hero, Jeremiah O’Brien, a privateer who attached British ships off the coast of Gloucester and Newburyport.

These early settlers are part of Boston’s Irish Heritage Trail, a three-mile self-guided trail of twenty landmarks, starting on the waterfront and ending up in the Fens.  The Trail covers three centuries of the Irish in Boston, from the 18th to the 20th centuries.

You can pick up a free copy of the Irish Heritage Trail map which is included in our Travel & Culture magazine. You can find the magazine at visitor centers on Boston Common, the Copley Plaza mall and at these locations. You can also book a guided "walking tour" on select dates here. Check out more details at IrishHeritageTrail.com.