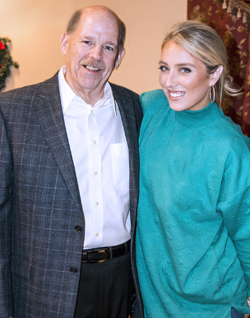 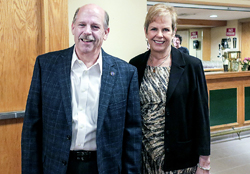 Dave with his sister, Judy Barrett, a fellow volunteer
and the ICC photographer. 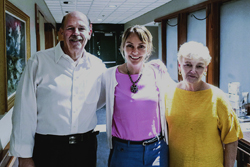 Dave with volunteers at the ICC 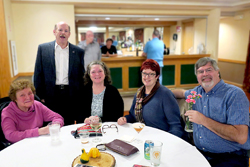 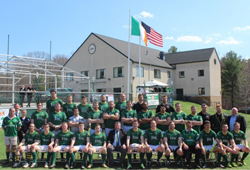 The Boston Irish Wolfhounds at the ICC 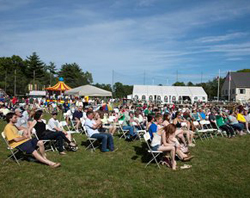 The Boston Irish Festival at the ICC

DAVID BARRETT
HONORED FOR HIS SERVICE
TO IRISH CULTURE

Dave Barrett, volunteer extraordinaire and a director at the Irish Cultural Centre in Canton, is being honored at the Golden Bridges Conference in November with the David R. Burke Award, named in honor of the great AOH leader from Lawrence. We spoke to Dave about his work at the Centre.

Congratulations on receiving the David R. Burke Award. Tell us your impressions of Mr. Burke and your feelings about this award.

When Dave walked into the ICC Library, he would call out for me in that deep, booming voice, always saying my name in Irish. I remember Dave’s passion for all things Irish and his steadfast commitment to support the Irish Diaspora and for causes back in Ireland, especially in the North. I loved the work he did in Lawrence, with the AOH but also his Irish library at the South Lawrence Public Library branch.

I’m honored to receive the Golden Bridges Award in Dave Burke’s name, but I’m humbled as well. I hope that I can make just a fraction of the contributions to the Irish community that Dave and other past recipients of this wonderful award have made.

Tell us a little about yourself – where did you grow up?

I was born in Boston in the Allston neighborhood. My parents lived in a six family house on Easton Street. I’m third generation Irish-American.

My great grandfather, Jeremiah Barrett settled here. In fact, one of his sons had a school named for him - the David L. Barrett School, formerly a Boston Public elementary school. My father, myself and my son are all named after him.

When I was 2 years old, we moved to a single family house in Brighton just a few doors down from Saint Columbkille’s Church. This is where I lived until I moved out in 1978 to marry the love of my life, Michelle Cabral.

You’re a lifelong member of the ICC. How did you first get involved and what was it like in those early years, as the centre was being built?

It was the great, late Eddie Barron who recruited me. We met professionally, when Eddie worked for Geraghty Associates Real Estate and I was an Inspector with the Boston Housing Authority. I was inspecting one of Geraghty’s buildings in Dorchester. Eddie, with his thick Sligo accent said as he shook my hand, “hmm Barrett, so you’re Irish.” I answered in the affirmative.

Eddie told me about these grand plans for the creation of a Centre where everyone could come to learn about Irish culture, history, music, literature and sports. Now, with interest piqued, I said ‘Great, where is this place?’ He replied ‘Well, we’re looking for a place to put it.’ Through Eddie I became a member of the Irish Cultural Centre.

The ICC search committee soon found a location – a 46 acre site in Canton, all wooded and pristine. The purchase was made, ground was broken and the dream moved from paper to bricks and mortar. Through the efforts of an army of volunteers led by Mike O’Connor and donations from generous sources, the Irish Cultural Centre of New England became a reality in 1989.

Under your stewardship, the ICC Library is one of the Centre’s prized treasures. Tell us about it.

The Music Archives contain 225+ Irish music books, including sheet music, lyrics and Irish music history. There are over 500 Irish music albums including some old shellac type albums that go back to the 1920s & 30s. We also have many tapes and CDs.

Our most popular activity at the Library is genealogical research, which helps members & non-members alike find their roots... We have access to subscription research sites like Ancestry.Com, FindMyPast.Com and Grenham’s Surname Database.

What do you foresee for the Centre in the years to come?

I foresee greater outreach to the Irish Diaspora. This is vital as I see the native born Irish as the fuel that keeps the Centre running. I see creative marketing ideas taking shape and our brand being recognized throughout the region, appealing to a much larger audience. I foresee greater partnering such as we have with TreeTop Adventures, to continue our appeal to the younger generation. I foresee philanthropic groups taking notice of what we do and contributing funds to help us fulfill our mission.

Finally, I foresee a much esteemed institution, one that my grandchildren will hopefully be involved in, where they can proudly proclaim, ‘My grandfather helped build this place.’