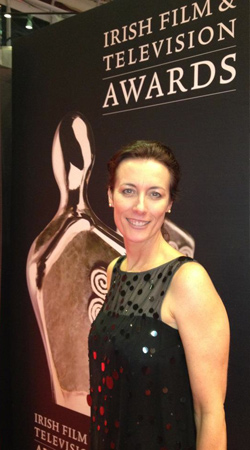 CELEBRATING IRISHNESS ON
THE BIG SCREEN

The Irish Film Festival Boston celebrates its 15th anniversary in March 2015, as one of New England’s premier ethnic film festivals and also one of Ireland’s most representative film festivals abroad.  We talked with Dawn Morrissey, director of the festival.

Congratulations to IFFB for reaching 15 years! How do you account for the festival’s longevity?

We show great films and have a huge loyal following, I know people who have been attending the festival since its inception. We also have stellar volunteers, and are lucky to have the backing of so many Irish groups both here in the US and Ireland. It benefits us that we are a not for profit organization also. It also helps that we were included in Moviemaker Magazine’s list of 20 Coolest Film festivals in the World in 2010. Toth Branding gave us “ Clover” our sheep logo - that has made a huge difference to our reputation globally. The Mayor of Somerville, MA awarded the festival with an official citation for our contribution to the City of Somerville.

Ireland is known for its literature and theater, its music and dance. Do you see a correlation between these types of Irish creativity and filmmaking?

The Irish have the gift of telling stories and that is what film and the arts are all about really. It’s in every Irish person’s blood to be a storyteller, if you’ve ever sat on a train from Dublin to Galway and heard the gossip you’d agree!

Is the Hollywood depiction of Ireland and Irishness something that helps or hinders Irish filmmakers?

With our record of having contemporary Irish film in the running for an Oscar every year for the past ten years in categories such as Best Short, Feature Animation, Best Song, or Best Set Design, Hollywood knows the days of Maureen O Hara and John Wayne’s The Quiet Man are long gone in Ireland. This is also pretty apparent when you see the number of US productions actually being shot on location in Ireland now. They know they are on to a good thing as our filmmakers are highly trained professionals with a great work ethic.

What surprises Boston audiences about the output of good film coming out of Ireland?

Two things come to mind, the number of great films that are now produced on an annual basis and how most of it is global cinema, dealing with issues people struggle with on a daily basis.

How did you get involved in the IFFB? Tell us about your own work in the industry.

I met Peter Flynn, the founder of the festival when I studied film at Emerson College. I went to see what the festival was all about in 2002 and ended up opening bottles of Guinness at the post screening party! The rest is history.

I am a film producer; I have worked on several feature films in Ireland and the USA and on several Boston Indies, one of which was a Sundance Finalist. I won regional and national awards from the Alliance for Community Media for my short films in my early days of filmmaking. I co- produced Green Grass, about illegal immigration, which was screened at the L.A. Film Festival and the Roxbury Film Festival. I executively produced the documentary Blazing the Trail; The O’Kalem’s in Ireland by Peter Flynn that screened at over 20 film festivals worldwide and was commission for broadcast by RTE in 2013.

I do have a feature script that I’m hoping to finish writing but working full time, directing a festival, finishing my masters degree at Boston College, being married to an amazing artist and being a mum to my two best productions, my boys, has me pretty much tapped out right now!