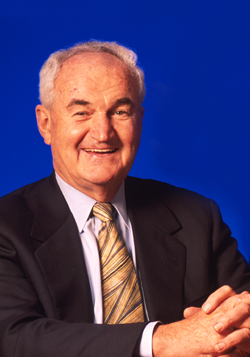 ‘Never forget where you came from’ is a stock phrase in the Boston Irish lexicon, and of particular relevance to Joseph E. Corcoran, founder, president and CEO of Corcoran, Jennison Companies, a 35-year old firm that develops, owns and manages real estate in 20 states  and  the District of Columbia.

The son of Irish immigrants from County Roscommon, Corcoran is one of Boston’s leading developers, credited as a pioneer in developing the concept of mixed-income housing and converting troubled public housing projects into successful communities.  The company currently manages over 26,000 units of multi-family housing and has developed more than $2 billion in property including Ocean Edge, a Cape Cod resort and conference center, three hotels, exhibition space and some commercial space. The firm now has 2000 employees, including four of Joe’s seven children, Joe Jr., Suzanne, Michael and Kathryn.

Throughout his successful career, Corcoran has applied the values and ethics he learned growing up in an Irish household in a city sometimes regarded as the Capital of Irish America.  From the top floor of his company headquarters in Dorchester, straddled by panoramas of the city’s skyline and the Boston Harbor, the 69 year old executive reflected on his successful career, his family, and his indelible affection for Boston and Ireland.

After graduating from Boston College in 1959 as a history major and serving in the armed forces, Corcoran broke into real estate with his two older brothers – John and Leo – giving him the experience to form his own company in 1971.

“My mother wanted me to be a priest,” he says smiling.  “But I like to think my vocation is really improving people’s lives.  That’s why I went into the housing business initially – I wanted to see if I could improve the way poor people lived.”

He got the chance to do just that in the 1970s, when his firm began converting public housing projects into mixed-income communities in Massachusetts and Maryland.  The concept was controversial at the time - government officials, financiers, and even tenants themselves were skeptical of mixing middle-class families with the working poor.

But Corcoran knew it was do-able, recalling his own experience growing up in Dorchester, Boston’s largest and most diverse neighborhood, in the 1940s and 1950s.

“In those days, most people grew up in mixed income housing, like I did, alongside Irish, Italians, and Chinese, cops, college professors, firemen and laborers,” Corcoran recalls.

People weren’t materially rich, he says, but they were wealthy in the ways that count --tight-knit families and neighbors, rock-solid churches and schools, plenty of parks and sports, and opportunities to better themselves.

“I thought, and still think, that’s how people should live,” he says.

His company has built mixed-income projects over the past three decades, and is currently finishing two, one in Pittsburgh and another in Stamford., CT. According to Corcoran, resident partnerships are also a key ingredient to the success of many of these communities.

The best known is Harbor Point on the border of Dorchester and South Boston, just minutes from Corcoran Jennison headquarters.  Opened with great fanfare as Columbia Point in the 1950s by Mayor John B. Hynes, the housing estate deteriorated over time and by the 1980s was a bastion of blight and despair.  The neighborhood was ruled by drugs and crime, and at times there seemed to be an utter breakdown of social norms.

“We offered the resident task force a 50-50 partnership in the deal,” Corcoran explains. “The residents share ownership and management and are involved in all the decisions about the property.”

The dramatic transformation of that 1,283 unit facility won accolades for the company.  It was the nation’s first federal housing project to be converted to private, mixed-income housing, and became the national model for a program administered by the US Department of Housing and Urban Development. It was also the subject of “A Decent Place to Live,” a community history published by Northeastern University Press in 2000.

The challenge of altering the culture that poverty breeds in public housing is enormous, Corcoran reflects, but so are the results.  A strong management team is put in place and social services are offered to people having difficulties.  Tenant input and cooperation from local officials are crucial.  Residents begin to take pride in their surroundings, and develop a community based on mutual respect and civility.  Neighborhoods become stable and crime goes down.

“The concept of mixed income housing is an old concept.  Public housing is relatively new, and it’s not been a success,” Corcoran says. “Our strategy is to go back to the way it was before, when it was a mixture of people.  It gives the poor a perspective, of another way to live.”

Recently Corcoran Jennison submitted a proposal to redevelop O’Deveney Gardens Housing Development on North Circular Road in Dublin.  The sixteen-acre site, with almost three hundred apartments, fits the classic profile of public housing: nearly 10% of the apartments are boarded up, even though there’s a waiting list of people trying to get in.  Drinking, drugs, and crime are common problems in the development.

“There’s plenty of work to be done in the United States,” Corcoran says.  “But we’re very interested in doing the Dublin project.  If we could make a contribution in Ireland, like I think we did in the US, I would be very satisfied.”

“We might lose the competition,” Corcoran says in characteristic candor, “because Ireland continues to segregate its poor people.  Mixed housing is very controversial in Ireland.  People don’t think it will work – just as they didn’t 30 years ago here in America.”

Corcoran’s parents John and Mary (Merrigan) Corcoran immigrated to Boston in the 1920s from County Roscommon, and settled in St. Peter’s Parish along Bowdoin Street in Dorchester, a vibrant parish established by Irish-born Father Peter Rowan in 1872.

His father worked as a laborer at St. Margaret’s Hospital and was out of work during the Great Depression, when Joe was born.  Yet they never felt poor or disadvantaged, but instead displayed the drive and optimism so typical of Irish immigrant families.

“My parents were very interested in their kids,” he says.  “They never went beyond the sixth grade themselves, but they wanted us to get an education, and they sacrificed to make sure that we did.”

The Irish connection remains important to Corcoran.  He has an Irish passport and dual Irish citizenship, and stays in touch with the Roscommon Corcorans, who still work the local farms and also run the large haberdashery in Roscommon Town.

He is a board member of the American Ireland Fund and supports groups like the Irish Chamber of Commerce in the USA, the Irish Cultural Centre of New England and the Boston Irish Famine Memorial committee.

He remains involved with his alma mater, Boston College, serving on the Board of Trustees and heading up the Buildings and Property committee.

Last year, when the Archdiocese of Boston was forced to sell the cardinal’s residence and 43 acres of land after sexual abuse law suits threatened the church’s solvency, Corcoran was Boston College’s key negotiator in the $107.4 million deal.  Today he is helping to develop the college’s master plan that will take BC well into the 21st century.

Another Catholic institution close to his heart is Emmanuel College, a small liberal arts school in Boston founded by the Sisters of Notre Dame de Namur in 1919, where one of his sisters went to school.

The beautiful campus was designed by noted architect Charles Donagh Maginnis, an immigrant from Derry.  Encircled by Fenway Park, the Museum of Fine Arts, and the Longwood Medical complex, the 17 acre college was land rich and cash poor.  With enrollment down and not enough students to fill the dormitories, the college considered selling some of its valuable land in order to gain some capital.

Corcoran worked with college officials to develop a real estate strategy and a master plan.  Instead of selling off the land, Corcoran convinced the college to work with Merck & Company, Inc. a pharmaceutical company trying to gain a foothold near Boston’s world-class medical facilities.

“The timing was perfect,” Corcoran recalls, “because the National Institute of Health was putting a lot of research money into the Longwood Medical Center.  We contacted Merck and went to visit them in New Jersey.”

Merck committed to building a research and development facility on college land, taking a 100-year lease and in turn providing Emmanuel College with an endowment of $55 million.  Corcoran Jennison served as the local developer of the R&D facility, and worked to secure local zoning permits, city approval, and community participation.

“The college went out and borrowed money at three percent to build a new building center, and its enrollment is now back to where it should be,” Corcoran says.

Married for 44 years to his wife Rosemary, also from Dorchester, the couple has seven children and 15 grandchildren.  Recently Corcoran put aside some time to begin collecting materials to compile memoirs of his family’s experience in Boston.

“It’s really for my children and grandchildren,” he says.  “I want them to know about what it was like for us growing up as kids in an Irish household.”