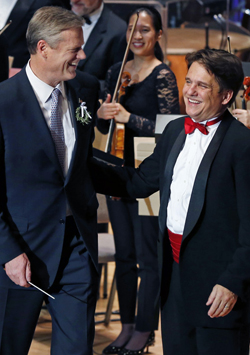 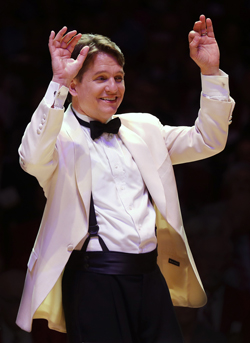 Back in December, maestro Keith Lockhart received a special holiday surprise from Massachusetts Governor Charlie Baker. Both men were on stage at Symphony Hall, with Lockhart conducting and the governor getting ready to narrate “Twas the Night Before Christmas,” a beloved holiday tradition in Boston. Governor Baker made an announcement that caught both the audience and Lockhart by surprise, that Keith was a recipient of the 2017 Commonwealth Awards for Achievement, the state’s highest honor in the arts, humanities and sciences.

Keith accepted the award, presented by the Massachusetts Cultural Council, at an award ceremony at the State House in February, where he was recognized for “his extraordinary stewardship of “America’s Orchestra” and for his generous civic spirit.”

Lockhart, who is celebrating his 22nd season as conductor of the famed Boston Pops Orchestra, is modest about his accomplishments while also finely aware of the honor it is to conduct the world-renowned band.

In an earlier interview, Lockhart talked about the pride and responsibility he feels for the Boston Pops.


“We perform an incredibly wide range of material for our audiences. By doing so, we hope to continue to appeal to our traditional and established audience, as well as attract and retain new generations of fans,” he said.

This season’s Boston Pops spring season certainly reflects that philosophy. Opening Night on May 10 features Queen Latifah, followed by the Music of Abba, Ben Folds, the B-52s, the world premiere of Sondheim on Sondheim, Gospel Night, Cirque de la Symphonie, Leslie Odom, Jr., a Tribute to Arthur Fiedler and the Beatles and Beyond.

This year’s tribute to Pops conductor John Williams features the Music From Jaws, the ultimate experience as the Boston Pops performs the entire score in synch with the movie on a giant screen. Other performances include E.T. in Concert, and John Williams Film Night, conducted by Keith Lockhart and John Williams himself.

“The Pops must continually reinvent itself,” Lockhart says, “… that’s the responsibility that comes along with reflecting popular culture as well as established traditions. We are the orchestra for everyone, and we take that responsibility very seriously.”