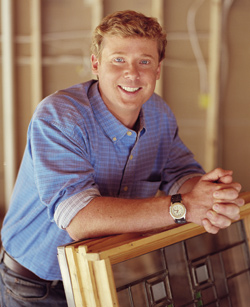 
It began with stubborn, old wallpaper. That’s what set Kevin O’Connor on a short road from fan to host of WGBH’s This Old House, the long-running home-improvement TV series that is one of Boston’s most beloved cultural exports.

In 2002, O’Connor and his wife, Kathleen, bought their first house, an 1894 Queen Anne Victorian north of Boston. “It was a total fixer-upper,” he says. “We wanted something we could work on.” But before long, “we had a list of stuff we couldn’t figure out on our own.”

The couple e-mailed a question about wallpaper removal to Ask This Old House, a spinoff show featuring the flagship program’s team of experts. “Remarkably, given the amount of e-mails I now know they receive, they answered ours.”

General contractor Tom Silva arrived at the O’Connor home a few weeks later, with painting contractor Jim Clark and WGBH cameras in tow. The friendly, enthusiastic O’Connor quickly struck a rapport with the crew as he and his wife stripped the walls under Clark’s direction. Full of good questions and quick to learn, he proved an ideal subject for the do-it-yourself segment.

“What I didn’t know then,” O’Connor recounts, “was that the former host, Steve Thomas, was planning to retire, so they had an eye out for his replacement. They called me a month later, completely out of the blue: ‘Do you want to host This Old House?’ I didn’t believe it.”

In April 2003, at age 34, O’Connor became the host of This Old House, the third in its history. It’s “the coolest job,” he says. “The guys are great . . . I get to work with the best people in the building trades, [and] it is a sort of round-the-clock tutorial—hopefully for the viewers as well as the homeowners in the process.”

The Emmy-nominated host is now in his fifth season.

In his native Maplewood, New Jersey, O’Connor “grew up watching This Old House on weekends with my dad and brothers,” he recalls. “I loved working with my hands and building stuff . . . typical stuff like tree forts, go-carts—anything that put a power tool or sawdust in my hands.”

Not so typical, the O’Connor kids—five boys and two girls—had a civil engineer father known for the 1970s expansion of Newark International Airport. “So our tree fort was the only one in the neighborhood with full sheets of plywood and real two-by-fours and stuff my dad snagged off the job site. We had a real serious tree fort.”

When he got older, O’Connor worked construction on his father’s projects, including two 30- to 40-story towers. That continued, during the summers, after he enrolled at the College of the Holy Cross in Worcester, Mass.

Later, O’Connor earned an MBA at Boston University. He was a senior VP at Bank of America when he got the call from This Old House.

New England was familiar territory for O’Connor well before college. His family had regularly vacationed in Rhode Island, where his grandfather was born and raised.

“My grandfather was one of eleven kids, and he was the only child born in the U.S.,” O’Connor says. “The rest were born in Ireland, mostly, or [during] a short stint in England, before they eventually came to the U.S. and settled in Pawtucket.”

O’Connor has traveled to Ireland several times, with one especially memorable trip to Sligo, whence his forebears came. He went in the ’90s while doing “a pretty exhaustive research project: I gathered the family lineage, mapped it out, found real old photos, and pieced together our ancestors’ story.”

Photograph in hand, O’Connor visited the cemetery at historic Sligo Abbey, where his great-grandfather was buried. “I had a picture of a very distinctive headstone with O’CONNOR across the top, and I figured it couldn’t be that hard to find,” he relates.

It was late afternoon and the fence was locked, and there was a sign that read something to the effect of ‘Go down to Patrick McGhee’s house, the third yellow one on the right, and get the key.’”

It was easier to just hop the fence.

Once inside, O’Connor began his search. “And literally, it felt like every other stone said O’CONNOR,” he laughs.

“It was as if we’d been slaughtered.”

O’Connor gave up as the sun set and the task turned Herculean. “After an hour or so,” he confesses, “the pub was calling me.”

Overall, though, O’Connor’s research was a success. “We got a good handle on our ancestors’ story,” he says. “The O’Connors on our side have an appreciation for the heritage,” which only deepened thanks to the diligent efforts of their Holy Cross history grad.

O’Connor shows that same diligence (and sense of humor) on the air, when asking the right questions of the experts—and at his own home, restoring the Victorian room by room over the past six years. “It’s satisfying, to take that house, which was pretty run down and dilapidated, and turn it into a place my wife and son and I just love.”

That’s why as a host, O’Connor can both “relate to the frustrations of homeowners,” he says, “and appreciate the satisfaction” when a project is finished.