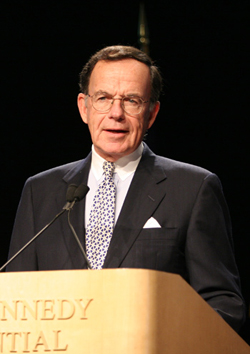 If politics and sports are as intertwined in the American imagination as we suppose, Paul G. Kirk, Jr. could just as readily excel as a United States Senator or as Baseball Commissioner.

For now, Kirks skills are squarely in the political arena, and our government is better for it. In the hard-ball world of politics in Boston and Washington DC, Kirk is highly regarded as a well-rounded all-star who plays to win, while honoring the rules of the game and treating his teammates and opponents with respect.

It came as no surprise when Governor Deval Patrick appointed Kirk as interim Senator of Massachusetts to replace his dearly-beloved friend Senator Ted Kennedy. His experience, judgment, integrity and achievement make Kirk a clutch player who knows just what to do in any given situation.

He takes Kennedys seat in the U.S. Congress during a crucial session that will determine the future of the nation, with health care, finance reform, energy and war at the front of the congressional agenda.

Caroline Kennedy has praised Kirk for his dedication to democracy and civic engagement, a commitment honed during his lifelong association with the Kennedy Family dating back to 1968, when he worked on Senator Robert Kennedys presidential campaign.

From 1969 through 1976, Kirk worked for Senator Ted Kennedy, serving as his chief of staff and political advisor and confidant. In 1980 he was National Political Director for Senator Kennedys presidential campaign.

Kirk steadily acquired a national role as a political strategist  as treasurer of the Democratic Party from 1983-1985 and its chairman from 1985 to 1989. He has served with distinction as Chairman of the Presidential Debates Commission and Chairman of the National Democratic Institute of International Affairs.

His most enduring legacy to the Kennedys may well be his role as Chairman of the John F. Kennedy Foundation at the Kennedy Library, a post he held from 1992 until his Senate appointment.

Under Kirks stewardship, the Library has become a global beacon on behalf of public service, where world leaders discuss political issues; children and teachers learn the value of civic engagement; and future generations discover insights and lessons of JFKs New Frontier through exhibits and programs.

Paul Grattan Kirk, Jr. comes from a storied Irish-American clan, whose grandparents immigrated to Massachusetts in the 19th century. His grandfather, John Lennon Kirk from Emlagh, County Louth, arrived in East Boston in 1872 when he was fourteen years old. John married Maud Johnson and they had fourteen children.

Their son Paul married Josephine OConnell of Lowell, whose grandparents (OConnell and Farrelly) had also emigrated from Ireland. Josephines father Edward was oldest brother of Cardinal William Henry OConnell (1859-1944), one of 20th century Bostons preeminent churchmen. It was Cardinal OConnell who presided over the wedding of Joseph P. Kennedy and Rose E. Fitzgerald in 1914 and he officiated at Paul and Josephines wedding in 1934.

Paul and Josephine raised five children in Newton before moving to Cape Cod Paul Kirk Sr. was a respected jurist who served on the Massachusetts Superior Court and Supreme Judicial Court of Massachusetts, where he presided for a decade before retiring.

At a memorial service, Judge Frank J. Murray noted that one of Judge Kirks final missions in his life was to visit his fathers village of Emlagh. The pilgrimage was undertaken with his sons, Paul and Eddie, in the summer of 1979, and the goal was reached. It was indeed an emotional moment for all three, but especially for the judge, Murray said.

How to Play the Game

In politics and sports, winning is important, but how you play the game also matters, as Senator Kirk, who played end for the Harvard football team, will tell you.

In 1993 baseball team owners nearly drafted Kirk to be Commissioner of Baseball; it would have been an ideal chance for Kirk to inject into professional sports the standards of integrity and accountability he has long brought to the political stage.

In 2004, Kirk wrote a hard-hitting article in The Boston Globe on the topic of whether baseball star Pete Rose - who admitted gambling on games when he was a player - should be banned from the Hall of Fame. In the article, Kirk firmly reminded Major League Baseball officials of the commissioners first responsibility -- to preserve the integrity of the game in all its aspects.

Baseball, Kirk wrote, is an early teacher of some of lifes most important lessonsit was on the ball field that we learned about playing by the rules. Its where we learned whats fair, whats foul; whats safe, whats out; what is right and what is wrong. Its where we were first taught that there are consequences for not playing by the rules. In baseball as in life, as kids and as grownups, we all need to be reminded that behavior matters, rules matter, accountability matters, and, yes, role models matter.

Commissioner Kirk would have surely enhanced the noble game of baseball, especially during the recent doping scandal of professional athletes. But thankfully for Massachusetts, Senator Kirk is suiting up in the rough and tumble halls of Congress, and he is bringing his A game.