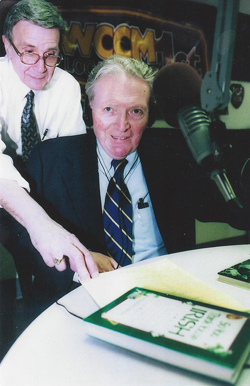 Each St. Patrick’s Day, the radio airwaves Merrimack Valley are filled with great Irish music, thanks to Tom Garvey, an accomplished pianist and scholar on Irish traditional music. Tom is set to host his 29th annual Irish Revue radio program on Tuesday, March 17, 2015 on WCCM 1110-AM, from noon to 4:00 p.m.

The Andover native has been performing around Massachusetts since the 1950s.  In high school, he traveled from the  Merrimack Valley  to Boston on weekends to play piano on Dudley Street in Roxbury, at the Hibernian, Rose Croix and InterColonial dance halls, where he played with Larry Reynolds, Brendan Tonra and Joe Derrane.

In 2008, Garvey was inducted into the Comhaltas Ceoltoiri Eireann (Irish Musicians Association) Hall of Fame for his lifelong contributions to Irish music.

Tom is also an accomplished organist who played liturgical music at St. Patrick’s Church in Lawrence for many years.

Back to the radio show: Garvey joins popular WCCM radio host Bruce Arnold each March 17 for a fascinating afternoon of Irish music. Garvey brings an encyclopedic knowledge of Irish music to his listeners each year, spinning old tunes from the McNulty Family, Myles O’Malley and other stars of a by-gone era.

He has donated many of his recordings to Boston College’s Irish Music Center and has been an adviser for other projects at Lawrence Public Library’s Irish Collection and the Boston Irish Tourism Association.