There’s no getting around it – Massachusetts is Kennedy Country.

From the cobblestone streets of Boston to the sandy beaches of Hyannisport, the Kennedy legacy is as much a part of Massachusetts as the Boston Pops, the Red Sox and a Cape Cod Clambake.

Local Irish-Americans have a natural affection for President John F. Kennedy, the country’s first Irish Catholic president.  And they appreciate the remarkable odyssey of the Kennedy family from humble beginnings to achievements of historic proportions. 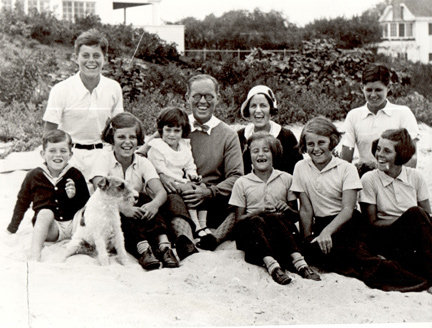 The Kennedy Family in Hyannisport

But it’s not just the Irish who are Kennedy loyalists. Citizens across the state have been voting them into office since 1906, when Rose Kennedy’s father, John “Honey Fitz” Fitzgerald, was elected mayor of Boston.

Visitors from around the world are also captivated by the Kennedys.  Many tourists visiting Boston and Cape Cod especially are intent on exploring the Kennedy legacy when they’re here and finding out about America’s most famous family.

You need only visit the John F. Kennedy Presidential Library & Museum in Boston’s Columbia Point to witness this interest first-hand. On any given day, tour groups and school classes, families and individuals, political and religious leaders make a pilgrimage of sorts, to be inspired by President Kennedy’s words and his deeds during his 1,000 days in office.

"International visitors account for approximately 10% of our overall attendance,” says Lee Statham, marketing director at the Library.  She cites Ireland, Canada and Britain as some of the top visitor countries.  “But the Museum attracts visitors from all over the United States, as well.  We are proud to be one of the top tourist destinations in Boston."

Given President Kennedy’s love of the sea, it’s fitting that the Library sits in splendor on a ten-acre waterfront with panoramic views of Boston Harbor.  It was designed by renowned architect IM Pei and opened in 1979.

A harbor walk around the Library perimeter offers beautiful views and the Boston skyline and the Boston Harbor islands.  You can see South Boston, the city’s quintessential Irish neighborhood and to the south the city of Quincy, another strong Irish enclave.

Visitors can view JFK’s 26’ sailboat, Victura, which sits outside of the library grounds in the spring and summer.

But it is the spacious facility itself, with well-conceived exhibit areas, an auditorium for special events, a small theater and multimedia stations that allow visitors to understand President Kennedy’s tremendous influence as a public figure.

The Library also has a cafeteria and a well-stocked gift shop offering visitors a full line of Kennedy books, such as the president’s inspiring Profiles in Courage and Caroline Kennedy’s children’s and poetry books.

The Library offers a full schedule of lectures and forums by some of the world’s leading government officials, political activists, writers and thinkers, and a strong education department that creates learning opportunities for students and teachers alike.

“The Kennedy optimism, patriotism and dedication to the common good is alive in this city of New Englanders, immigrants and international students,” says Pat Moscaritolo, head of the Greater Boston Convention & Visitors Bureau.

Kennedys on the Cape

The other outpost of Kennedy Country, especially in the summer, is Cape Cod, the spiritual and familial home of the Kennedy family since the 1920s, a place that holds rich meaning for generations of Americans and foreign visitors.

The six-acre Kennedy Compound overlooking Nantucket Sound in Hyannisport has been the site of countless family gatherings, the place where children and grandchildren gathered each summer.  It was the year round home of Rose Kennedy for many years, who attended daily mass at nearby St. Francis Xavier Church on South Street in Hyannis until her death in 1995. 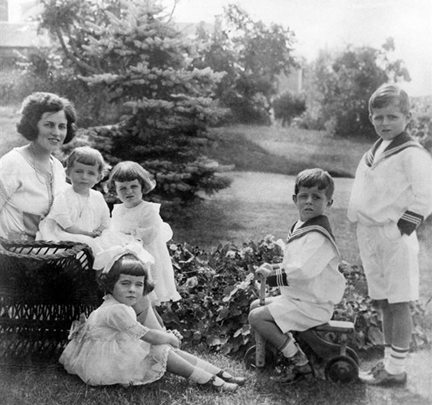 One person familiar with the Compound is Neil Connolly, who was personal chef to Rose Kennedy and Senator Ted Kennedy’s family for a decade.  He knew the favorite dish of each family member, and he cooked thousands of meals for the Kennedys and their many visitors over the years.

“The Compound sometimes seems like a country unto itself, alive with an ever-widening assortment of residents and visitors,” Connolly says.  “There was always room for one more – or twenty more – at the table, on the sailboat, or at the clambake.”

Connolly’s book, In the Kennedy Kitchen: Recipes and Recollections of a Great American Family, provides the favorite recipes of the clan while affectionately recounting special Kennedy gatherings like the annual Fourth of July clambake.

“Since President Kennedy's election, visitors from around the world have been interested in the Hyannis Port Compound and the special qualities that attracted the Kennedys to Cape Cod,” says Wendy Northcross, CEO of the Cape Cod Chamber of Commerce.

Since the Compound is off-limits to the general public, Northcross says the JJK Museum at 397 Main Street in downtown Hyannis is where visitors go.

“The Museum was created 15 years ago to help tell the story of the President's time on Cape Cod and how the serenity and beauty of the place sustained him during his life and his presidency,” she says.

Filled with photographs, videos and memorabilia, the museum provides an endearing look into the president’s life on Cape Cod, sailing, playing touch football, connecting with family while contemplating the unique beauty of the Cape.

Outside the Museum is a new statue of President Kennedy by local sculptor David Lewis, unveiled in 2007.  Senator Edward Kennedy attended the unveiling, and spoke of his brother’s love for the Cape.

“President Kennedy loved this community, he loved Cape Cod,” he said.  “He was proud of the National Seashore Park.  He read Thoreau’s Journals of Cape Cod, and (knew) the walks from Monomoy to Provincetown. 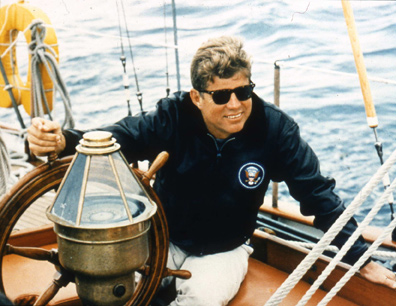 Another place to quietly reflect on the president’s life is the John F. Kennedy Memorial Park at 430 Ocean Street in Hyannis.  It overlooks Lewis Bay, with fishing boats docked on one end and the Veterans Memorial park on the other.  The beautifully landscaped park has a crafted stone wall with a bas relief image of JFK and the presidential seal.

A fountain and reflecting pool (which doubles as a wishing well) provides a nice setting to reflect upon the Kennedy legacy and to enjoy the local environment.

The Kennedy family’s affection its Irish heritage is also a strong tradition.  Last year the Library presented a major exhibit on JFK’s trip to Ireland in June 1963, and each year presents an Irish Person of the Year award to local Irish-American leaders.

In May 2008, Senator Kennedy welcomed Ireland’s outgoing Prime Minister Bertie Ahern to the John F. Kennedy Presidential Library, where they renewed the special relationship between Ireland and the Kennedy family.

Mr. Ahern, in one of his last official duties as Prime Minister, announced that the Government of Ireland was making a $2 million donation to establish an Irish Heritage Collection at the Library, according to Brent Carney, spokesman for the Library.

“It’s a tribute not just to the library but to the Kennedy family and particularly to Senator Kennedy,” says Chuck Daly, Director Emeritus of the Kennedy Foundation and former congressional liaison to President Kennedy.

Senator Kennedy himself has been an enthusiastic promoter of all things Massachusetts and of the Irish-American community here.

“It gives me great pleasure to welcome you to Massachusetts, the most Irish state in the union.  Today one of every four residents boasts some Irish ancestry, and that is borne out by the cultural vibrancy of the Irish community.  So enjoy your Irish roots in Massachusetts.  Like the Kennedys, you may never want to leave!”

Where to stay in Boston

There are several hotels within a mile of the John F. Kennedy Library in Dorchester, and shuttle buses from the hotel or subway are readily available.

Where to Stay on Cape Cod

For a wider selection of hotels in Massachusetts, click here.