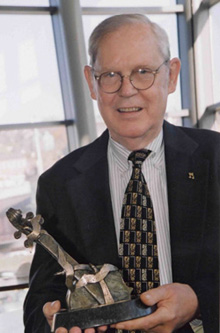 Irish fiddle and flute player Brendan Tonra is remembered as a congenial, somewhat shy, old-style Irish gentleman whose music spoke for him throughout his life. This past February, he succumbed to cancer at age 78.

Tonra came to Boston in 1959, from Gowlan, County Mayo, and quickly joined the Irish music scene in Dudley Square, Roxbury. He played in the Tara Ceili Band with Larry Reynolds, Tom Garvey and others, and the Connaught Ceili Band with Mike McDonagh and Jimmy and Sally Kelly. Later, he played at Comhaltas sessions, in concert settings, and at informal house gatherings with close friends.

“I first met Brendan when I came out to Boston,” said fiddler Séamus Connolly. “I was lonesome for Ireland, and I was intrigued to hear him playing. I didn’t think I would have heard Sligo style fiddle playing in Boston.”

Brendan’s enduring musical companion for over three decades was pianist Helen Kisiel, who first met him in the 1970s when she took tin whistle lessons from him. She eventually became one of his dearest, most caring friends, and his soul mate.

“We made a nice musical partnership,” Kisiel says. “Eventually, I could accompany him on the piano on everything he played, including his new tunes.”

In 2002, Brendan won Ireland’s TG4 Gradam Ceoil Composer of the Year award, and traveled to Ireland to accept it.

Recently, Brendan and Helen made a children’s book of his tune, Three Ducks and a Goose: an Irish Tale and Tune.

Brendan was also a fine fiddle player and flutist. Fiddle champion Brendan Bulger says, “His bowing was nice and easy, in a way that allowed you to see the rhythm and phrasing of the music he plays. He didn’t look like he had to work at it at all, just kind of easily lifting music out of the fiddle.”

“His fiddling was distinctive, but not forceful,” said radio host Brian O’Donovan.

Pianist Tom Garvey recalls that Brendan often played the wooden flute in bands where there were already fiddlers, helping to flesh out the full ceili sound.

Brendan was married to the late Bridget (Donohue) Tonra and has three daughters, Barbara, Sheila and Jacqueline. His funeral was held at the Mission Church in Mission Hill, not far from the old music halls in Dudley Square. He is buried at the New Calvary Cemetery in Mattapan.