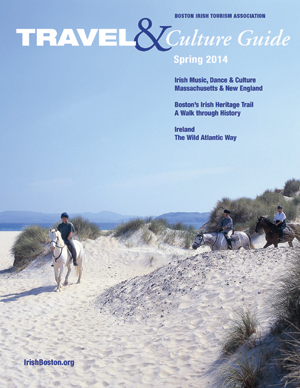 (BOSTON) -- The Boston Irish Tourism Association (BITA) has issued its 2014 annual St. Patrick’s Day issue of Travel & Culture Guide, featuring a round-up of parades, concerts and cultural activities taking place in Massachusetts, New Hampshire and Quebec City and Ireland in March and through the spring.

There is also information on traveler amenities like hotels and travel agencies, pubs and restaurants, gift shops and retail shops, museums and cultural associations.

BITA was formed in 2000 to promote cultural tourism year round.  It publishes three issues of Travel & Culture Guide in March, June and October.  BITA also created Boston’s Irish Heritage Trail highlighting Irish landmarks throughout Boston and around the state. The map is included in this issue of the Guide.

For further details on the festivals and concerts, as well as year-round Irish and cultural activities, hotel packages, gift shops and Irish pubs, visit IrishMassachusetts.com.

For details on vacationing in Massachusetts, contact massvacation.com and BostonUSA.com

You can pick up a free copy of the Travel & Culture Guide at these locations.