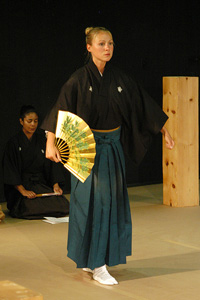 FINDING THE NOH IN IRISH THEATRE

Carrie Preston, Assistant Professor at Boston University’s College of Arts & Sciences, is researching the connection between Japanese Noh Theatre and its influence on William Butler Yeats, a founder of Ireland’s National Theatre movement in the early 20th century.

We spoke to Professor Preston recently at Boston University.

What was it about Noh theatre that initially captivated Yeats?
Yeats was hoping to establish a theater that, like Noh, was free from the influence of the British theater, a “decolonized” theater. He was captivated by the seven centuries of Noh tradition and the idea of creating a theater for a small, aristocratic, art-loving audience. Noh’s strategies for staging extreme states of mind, possession, and hauntings by ghosts also appealed to him.

Are there theatrical connections between Noh and Irish theatre after Yeats?
Yeats’s interpretations of Noh, especially as conveyed in his famous Noh-inspired play At the Hawk’s Well (1916) did continue to influence the Irish theater. Beckett, among others, admired At the Hawk’s Well and the play contributed to Beckett’s minimalist aesthetics and focus on choreographed stage movement, especially evident in plays like Footfalls (1975).

Can you contrast Noh with Irish step dancing?
The basic posture and walk required by Noh movement is very different from Irish step dancing and every other western movement form with which I am familiar. The knees remain bent and the pelvis is tipped forward presenting the masked face most prominently to the audience. In the Noh step, called suriashi, literally sliding foot, the heel retains contact with the floor as it slides forward. Noh tempo is much slower than Irish step dancing, even the most lyrical soft shoe pieces.

How is your book coming along?
Learning to Kneel: Noh, Modernism, and the Pedagogies of Transnational Performance is still under development. I am working with a wonderful editor, and I hope to finish the book in the next year.