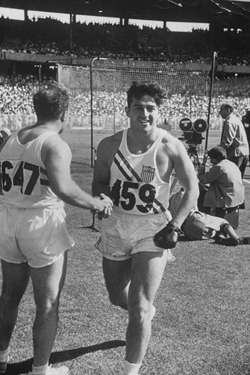 If you saw Harold Connolly as a young boy you might not think hed stand a chance to become one of the worlds most elite athletes and a legend in Boston sporting annals.

But thats exactly what Connolly became, overcoming an early physical disability, setting dozens of American and World records, and becoming an inspiration to generations of children and adults.

In 1956 he won the gold medal winner at the Olympic Games in Melbourne, Australia.

His story of perseverance, pride and ability to overcome a physical disability has made him a world champion in the eyes of many.

Born in Somerville, Massachusetts, Connollys left arm was damaged at birth with severe nerve paralysis, and he spent most of his youth in physical therapy. An experimental procedure at Childrens Hospital in Boston repaired some of the damage, but it caused him to wear a leather and metal brace until he was six years old.

Connolly worked tirelessly on strength conditioning, walking, lifting weights, and exercising, and by his senior year he fulfilled a childhood dream by making the football and track teams at Brighton High School in Boston.

After graduating from Brighton High in 1949, he set his sights on Boston College, the Jesuit institution nearby  back then BC was a commuter college for generations of working-class sons of Irish immigrants trying to better themselves.

Boston College was the place where you went if you had aspirations for college and you lived in Brighton and you were Irish-American," he told the BC Chronicle. "I had begun to improve as an athlete in my senior year in high school and was beginning to get some confidence that I might be able to be a college athlete."

He joined BCs track and field team, choosing the shot put and discus before taking up the hammer throw. By his senior year he set the school record in the hammer.

Two years after graduating from BC Connolly set the new US record of 201 5.5 and began setting his sights on the Olympic Games.

Connolly developed his own style of hammer throwing to compensate for his left arm, in which he utilized his great leg strength as well. His aunt Mary, a ballet instructor, helped him with his footwork, and he transformed a pair of ballet slippers into a new kind of track shoe that is commonly worn today.

His showdown at the 1956 Olympic Games in Melbourne against Soviet champion Michail Krivonosov took place against the backdrop of the Cold War era between the US and Russia, and the hammer throwing rivalry took on epic proportions.

Krivonosov had an early lead with a massive throw of 206 8, but Connollys fifth throw of 207 3 carried the day, winning him a new Olympic record and the first place Olympic gold medal.

He later told the New York Times that he was self-conscious on the victory stand having to raise his left arm  which was four inches shorter than his right  over his head in the traditional victory pose.

That awareness and sensitively opened up an exciting new chapter in his life some years later when Eunice Shriver selected Connolly to head up the Special Olympics in America. He served as executive director of US Programs for the Special Olympics from 1988 to 1999, helping to raise its mission and profile.

Connolly was also a high school teacher for much of his career, teaching in Boston and Santa Monica. He coached hammer throwers at Georgetown and Boston University, and today he continues to advise young athletes.

The idea to commemorate Connollys achievements came from State Representative Kevin Honan of Brighton, an Irish-American who grew up in the same neighborhood and heard about Connollys feats.

''To win an Olympic gold and overcome that physical challenge is such an extraordinary feat, and people need to know about it," Honan said.

They chose a site, in front of the William Howard Taft School in Brighton, where Connolly played as a youngster. Artist Pablo Eduardo worked on the project for two years, creating a masterpiece that depicts Connolly, frozen in the midst of a hammer throw. 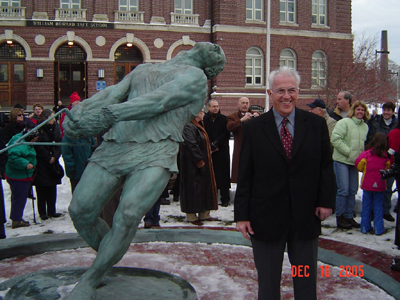 The dedication of the statue in December 2005 was a memorable occasion for Connolly, his family, friends, classmates, and fellow athletes. Honan was master of ceremonies.

Connolly himself was humbled by the honor.

I am eternally grateful to all of you, he said to the assembled crowd. I am here today, filled with intense pride for being a member of this community that made me into the man I became. 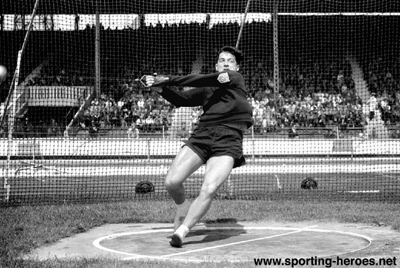