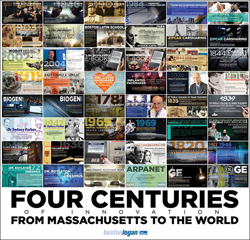 Travelers at Boston’s Logan International Airport have a new reason to linger in the airport between flights. Passing through the new Walkway between International Terminal E and JetBlue Terminal C, passengers can stop to view a fascinating new permanent exhibit entitled Four Centuries of Innovation.

Unveiled last summer by Massport CEO Thomas P. Glynn and airport officials, the exhibit is the brainchild of Dr. Robert Krim, a well-regarded and accomplished public historian. He began the project over two decades ago while directing the Boston History & Innovation Collaborative, and this year brought it to fruition with the help of public relations maven Janey Bishoff and with the help of Massport’s talented graphic design team. 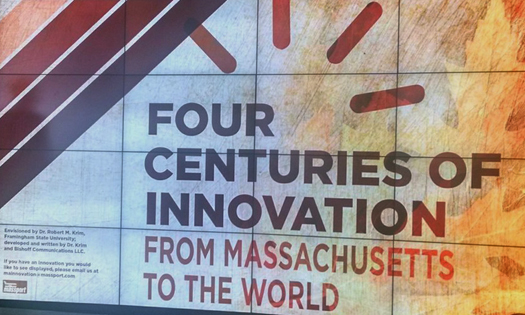 Now Professor and Founder of the Innovation Center at Framingham State University, Dr. Krim continues to promote innovation as one of the most important traditions to come out of Massachusetts since the Pilgrims landed here in 1620. Krim called Boston “one of the two or three most important cities in the world” for innovation, thanks it its cluster of universities, research centers and unshakable entrepreneurial spirit.

Further, Krim asserts, “Massachusetts has more than 500 breakthroughs which changed the nation and/or the world….in medicine, technology, education, financial and social justice. It’s an incredible set of stories, which we want others to know about.”

Over the past several years, Massport has been improving the airport experience with a series of exhibits that speak to New England’s heritage and history. Last fall, it opened an exhibit entitled Deconstructing Stigma: A Change in Thought Can Change a Life, featuring larger-than-life photos of people who have courageously faced mental illness.

In February, Terminal E, Massport gave travelers a glimpse of Boston’s history, courtesy of the Boston Herald. Massport’s Tom Glynn said he noticed a display of famous Herald headlines during a trip to the newspaper, and asked the Herald if he could borrow the idea for the airport. The result is Herald Headlines, a compelling display of iconic headlines that give travelers a sense of Boston’s past.